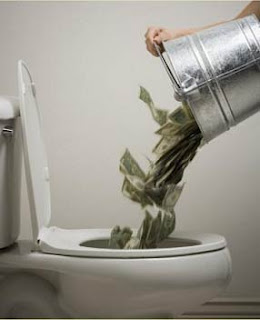 NIH Wasted How Many Millions
on UCLA's HIV Model?
Last night, I had one of those math moments I occasionally suffer. My curiosity was piqued with one question: How much federal funding did the National Institutes of Health waste on Sally Blower's confusing math model on alleged HIV drug resistance in San Francisco?

In her recent controversial study, Blower and colleagues acknowledged the financial support from the multi-year NIH/NIAID grant number RO1 AI041935, and I used that info to follow some of the money.

Let's go over some public info about Blower feeding at the AIDS research trough at NIH, with this one grant that allows Blower to build models related to HIV, TB, and herpes drug-resistant strains.

Unfortunately, similar NIH grants pages for 2004, and 2005, and 2006, and 2007, do not exist. Numbers for those years are also missing from the NIH page on the history of the grant. I will not estimate what public funds, if any, were received by Blower for those years.

The total for figures provided by the NIH comes to $3,128,317. How much of that went for the HIV drug resistance modeling for San Francisco? Only the ivory tower-living Blower can divulge that info and we know her m.o. is silent non-engagement over the questionable model.

I hazard to say that at least $1 million went for the decade-plus of HIV modeling. Blower research ain't cheap. That's a lot of money that could go toward buying cocktails for people with AIDS, who currently are on state ADAP waiting lists, because there's not enough federal funding for life-extending HIV drugs.

The only people helped by this grant are the modelers, who spin their research to get published in peer-reviewed journals, that in turn leads to more grants and studies, and advancement for their careers. Actually helping people living with the acquired immune deficiency syndrome is not ultimate goal of the academics.

I'd like to see the feds cut Blower's funding, end her feast at the AIDS research trough, and redirect the money saved into saving the lives of people with AIDS.
Posted by Unknown at 7:42 PM
Email ThisBlogThis!Share to TwitterShare to FacebookShare to Pinterest