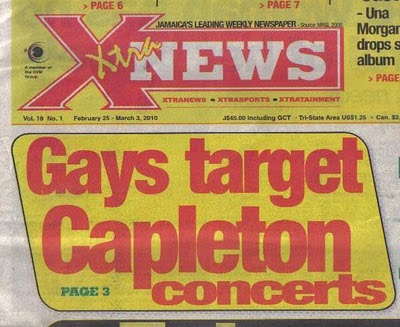 (Front-page teaser of a recent edition of Xtra News in Jamaica, which is not online. Photo credit: Gay Jamaica Watch.)
Thanks to the activists at the Gay Jamaica Watch blog, I learned today that hate performer Capleton, who advocates violence against gay people, has said he's sorry to his fans for his canceled tour dates in California. Boo, hoo, hoo. I'm not the least bit sorry for causing him some financial pain.

This homo-hating reggae singer's management issued the apology to fans last week, and blamed the gays for his troubles:

They have once again used their strong arm tactics to intimidate concert promoters and venue owners putting misinformation in the public about the artiste to further their own agendas. Capleton is very disappointed that his many fans (that cross all races and creeds) have not been able to see him at his scheduled shows in California this past week. He has performed at the same venues and festivals over the past two years with no incident bringing a message of love for all through Reggae music. The barrage of protest from these groups is unwarranted and has been addressed many times in the media in the past. The artiste has a forgiving heart for what has been done to him and will continue on the high path.

It will take much more than mere words in a press release for me to believe Capleton has "love for all." The high level of renewed criticism about Capleton's advocacy of bashing and physically harming gays may not have existed during his previous money-making tours in California, but thanks to grassroots activists in Humboldt, Oakland, San Francisco and San Luis Obispo, but the criticism is going far to send a message to _all_ hate singers from Jamaica.

These s0-called artistes can expect organized pressured on concert promoters, arenas and smaller clubs, and pickets at their performances. We American gays will not be silent and accepting of unbelievable and weak words about their supposed love of all people.

Here is a scan of the Xtra News story, which came from the Gay Jamaica Watch site, about Capleton's apology to his fans: 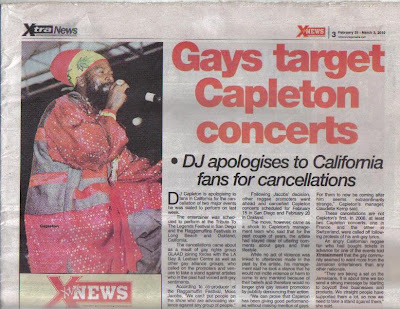 Posted by Unknown at 5:35 PM
Email ThisBlogThis!Share to TwitterShare to FacebookShare to Pinterest

What kind of boycott are these guys planning? No more reservations for Rosie's cruises?