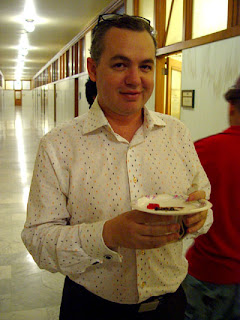 Sunshine King Nets $3.5M for SF
If I had to pick one man as the top sunshine advocate for San Francisco, it would be Kimo Crossman. Sure, there are lots of terrific sunshine fights here, each with great skills and knowledge, and Kimo has that in abundance, but what makes him special is his friendly way of reaching out to many ordinary folks who need guidance or advice in filing requests and opening up the government.

Over the years, I've seen Kimo in action at different venues and his core belief -- that our governmental agencies are answerable to citizens and internal documents belong to the people -- comes shining through at all times.

Being an admirer of his, I'm happy to see Kimo getting some public recognition for finding $3.5 million for the city. The Bay Guardian reports:

But in the last couple days, he earned a gold star from the San Francisco Assessor-Recorder for pointing out that when Morgan Stanley walked away from five high-profile San Francisco properties, it neglected to pay a transfer tax. Thanks to an email from the ever-inquisitive Crossman, the assessor-recorder was able to collect roughly $3.5 million and feed it to the city’s ailing General Fund.

It started when Crossman read an article on Bloomberg.com about Morgan Stanley walking away from five San Francisco skyscrapers last December that it purchased in 2007 [...]

He was annoyed. “Individuals can’t walk away from their obligations,” he said. But for the huge financial firm, “it doesn’t appear that they have any negative repercussions.”

It just warms my activist, emailing-sending heart to see one of my mentors bring a windfall of money to the cash-starved city coffers, all because he sent an email to a government worker.

So what did the assessor's office have to say about the good work of our Sunshine King? A deputy in that office wrote to Kimo:

I wanted to let you know that no exclusion was applied toward the Morgan Stanley transaction. As a result, the Assessor-Recorder's Office collected about $3.5M in transfer tax revenue for the City and County General Fund. I want to thank you, once again, for being engaged in these tax issues. I certainly appreciate knowing that there are people, like you, who are also monitoring these transactions. I would ask that you continue to send us these emails.

And why did he ask the assessor a few questions about Morgan Stanley taking a hike on its San Francisco properties?

Crossman told the Guardian, “I did it just to help the city and because I was mad at the banks walking away from their loans.”

The city has a discretionary law that allows for agency chiefs to award citizens a reward, for saving or earning the city big money, and Kimo likely qualifies for a commission of the $3.5 million. However, he doesn't expect to receive a check from the Mayor anytime soon.

He may not be receiving a finder's fee, so when you see Kimo around town, be sure give him a healthy dose of much-deserved praise for all of his pro bono service on behalf of open government and public accountability.

(Photo credit: SF Mike and his Civic Center blog.)
Posted by Unknown at 9:47 PM
Email ThisBlogThis!Share to TwitterShare to FacebookShare to Pinterest