The final results this evening, early morning, actually, in my BART race show a bump from the first results released earlier. I'm just over 7,400 votes and that's 7.12% of ballots counted thus far. It should go up slightly as provisional and other ballots-to-be-counted are tallied.

It will give me great pleasure to remind the victor in this race, my friend Bevan Dufty, and the rest of the BART board and senior management that I represent a sizable chunk of the electorate in this district.

All the more remarkable in that my budget was under $100. I also ran as a registered Green Party voter. Independence has its rewards.

Huge thanks to the folks who voted for me!

On this depressing and infuriating night of President-elect Trump making plans to measure the drapes of the Oval Office, I'm enjoying balm upon my battered queer soul.

Pulling in 7,400 votes on a minuscule budget, on top of the public health and safety changes I've begun at the 16th Street Plaza, which Bevan has assured me he will work on as the BART director for District 9, is deeply healing and satisfying. 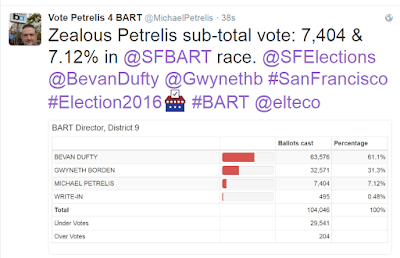 Posted by Unknown at 12:27 AM
Email ThisBlogThis!Share to TwitterShare to FacebookShare to Pinterest