Positive Side of 'AIDS Victim' Use in Today's Media?

The 1980s AIDS plague years were full of pejorative and demeaning language used by the mainstream press that sadly but quite accurately reflected how much Americans looked at who was contracting HIV and dying.

Self-empowerment by those infected led to creation of the terms persons with AIDS and PWA. A gathering of PWAs in Colorado 1983 developed the Denver Principles which boldly began thus:

It was a constant struggle insisting on terminology that didn't stigmatize and undermine assistance for HIV pozzies.

That struggle continues today as evidenced by three recent examples of mainstream reporting and writing.

In August, the Vice news site headlined a piece, "Why the Ashes of AIDS Victims on the White House Lawn Matter.

The autumn issue of Book Forum in a review of Rabih Alameddine's new book, refers to a deceased character as "a surrogate marker for the Unknown AIDS Victim."

Finally, the November edition of the Castro Courier, in a gayborhood that was devastated and challenged by the AIDS epidemic, they ran this sub-headline: "Student to Honor Names of AIDS Victims."

What possible positive element could I possible extract from these citations?

This is proof we are in a second post-AIDS-crisis phase and that those writing and editing these publications escaped the plague years and the war over language and perceptions of who was getting HIV and how they were treated with shunning and vicious shaming.

For those under 45 or so, and certainly folks younger than that, they are blessed with an America that has controlled AIDS to a remarkable degree and the lives of many long-term and recently-diagnosed are vastly improved.

On the other hand, an important part of the AIDS fight in the United States has been forgotten or perhaps was never learned by these writers and editors.

AIDS victim? No, not a suitable choice of words. 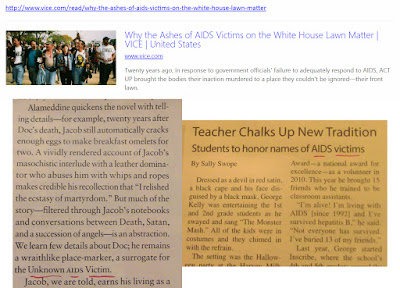