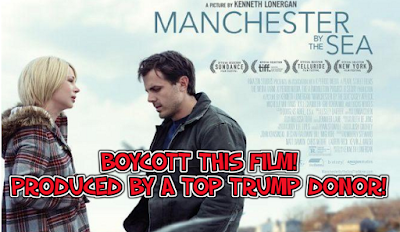 The researchers at OpenSecrets.org have compiled this list of the top twenty donors to the Donald J. Trump presidential campaign. I'm sharing it to see if other folks wish to consider holding these companies and the persons who run them to account.

Only one contributor produces something I can boycott. Top donor number nine, the John Powers Middleton Companies, is run by a young GOP fundraiser and Hollywood producer who teamed up with Casey Affleck to produce the Oscar-buzzing "Manchester by the Sea" that soon opens wide across the nation.

No need for me to spend my cinema dollars seeing a film made by one of the top ten donors to the election of Trump and Pence. I'm boycotting "Manchester by the Sea" and ask for your feedback on creative ways to send these Trumpians a message or two.

"Middleton has spent time in major donor fundraising, political strategy, the youth movement, and media, with his first effort in creating and producing The Alfonso Aguilar Show.[4]

"In support of the Republican Party, John Powers Middleton has hosted a variety of events. This included an early summer 2015 fundraising event for Jeb Bush, a candidate for the Republican nomination in the 2016 presidential election.[10]

"As of June 2016, John Powers Middleton Companies is the top donor to Donald Trump's 2016 presidential campaign.[11]"

From OpenSecrets.org. Let's put this info to good use:


Posted by Unknown at 10:30 PM
Email ThisBlogThis!Share to TwitterShare to FacebookShare to Pinterest