Receiving this propaganda today, with only four days to go before Election Day, my first thought was who waits this long to send out such a mailer? Early voting in California started on October 10, so I'd expect a campaign to began voter engagement via snail mail prior to this week.

"I know first-hand about Kink.com. During one shoot for this company, multiple sex partners converged on me while I was tied up. One man was so aggressive during oral sex that he cut his penis on my teeth.

"As blood dripped on the floor, I asked the producer to make him wear a condom before shooting a sex scene. No way, I was told.

"Two weeks later, I was diagnosed with HIV. My career was over after just three months and my life has been changed forever."

I'm sorry she has sero-converted but we don't know if she contracted HIV from the male performer in question and if he was HIV poz at the time of shooting.

Also, I find it highly unlikely he would be able to maintain an erection with his cock bleeding. 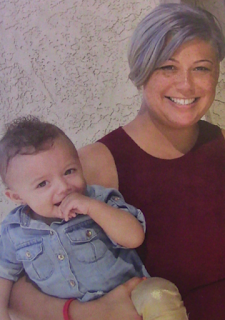 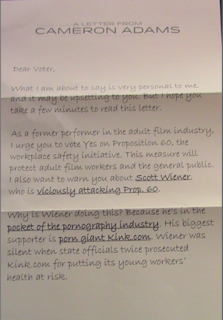 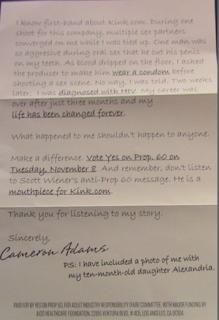 Posted by Unknown at 1:43 PM
Email ThisBlogThis!Share to TwitterShare to FacebookShare to Pinterest