Look who I ran into while campaigning tonight, amid the large crowd walking into the Castro Theater for a showing of Werner Herzog's new documentary "Into the Inferno."

None other than Tim Sweeney, former deputy executive director of the Gay Men's Health Crisis who was a co-founder of ACT UP and co-facilitator of the group's meetings.

The 30th anniversary of ACT UP's creation will be commemorated in the spring of 2017. Damn proud to still be here and spend a few moments from anyone who was in ACT UP during the plague era.

You knew there was something special about ACT UP when the meeting to zap the closeted Mayor Ed Koch at his appearance at GMHC's upcoming annual AIDS Walk, was essentially run by Tim.

Two former East Coast-living survivors of the AIDS plague, see each other on Castro Street and share smiles, chat about Herzog's latest cinematic expedition and enjoy a fabulous evening in a packed movie palace.

Surviving and thriving and waiting for the election to be over! Vote for zealous Petrelis for BART board. 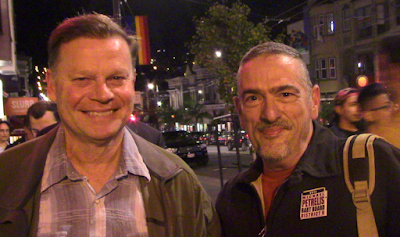