Did you see the "Jeopardy" clue in the national print edition of today's New York Times's arts section?

It was this: "He won a Tony and later an Oscar for the same role & decades later, published a memoir called 'Master of Ceremonies."

The response, in the form of a question, of course, is "Who is Joel Grey?"

He's receiving the Oscar Hammerstein Award soon enough from the York Theater Company, according to their ad next to the clue! 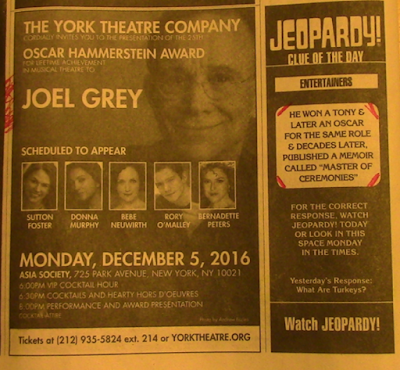 Posted by Unknown at 6:45 PM
Email ThisBlogThis!Share to TwitterShare to FacebookShare to Pinterest