A few weeks back, the Washington Blade published this opinion piece of mine and I am now sharing it on my blog to bring additional attention to these gay and AIDS concerns, along with supporting documents. I hope these facts stir interest in what Hillary did and failed to do during her tenure in Little Rock. -Michael

It cannot be said that during her nine years as first lady of Arkansas that Hillary Clinton started a local conversation about AIDS — her advocacy had such a low-key volume that no one heard it.

Now that the dust-up over her grossly uninformed statement about Nancy Reagan starting a national discussion about AIDS has subsided, it’s relevant to examine her HIV record, such as it is, from her Little Rock years.

Remarkably, during the 1980s when their husbands held power and the AIDS epidemic created crises at every level of government, as thousands of gay men and others suffered and died, neither first lady left a paper trail of actions or statements addressing the grief, tremendous fear and stigma we lived with.

As a member of the ACT UP/Presidential Project from late 1991 to the November 1992 election, I kept thick files on Gov. Bill Clinton’s campaign and reporting on his HIV record. Nothing in my archive includes any reference to Hillary’s HIV record and online searches fail to locate any relevant source materials.

If she took action or spoke up prior to campaigning against George H. W. Bush, it went unreported or duly noted.

Hillary held no elective office while her husband served as governor but she was no shrinking violet when it came to injecting herself into public policy matters and state government, and fighting for causes she believed in.

In 1977, then-attorney general Bill Clinton endorsed modernization of the state’s homosexual and bestial anti-sodomy statute and as governor made no public comments calling for repeal of the law. Same goes for Hillary. When in 1991 courageous local Democratic politician Vic Snyder, who eventually served as a representative in Congress, attempted to erase the law from the books, neither Clinton offered him support. 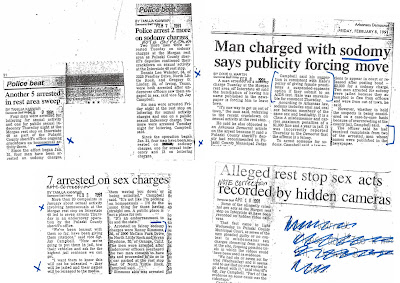 Newspaper accounts from 1991 offer details on how police entrapped men cruising for sex at highway rest stops and other locations, and after they were arrested and charged under the sodomy law, their names and home addresses were published for all to read.

Arkansas’s sodomy statue was in effect until the Supreme Court struck down such laws across the land, but while it was on the books it was vigorously used by prosecutors against LGBT persons. 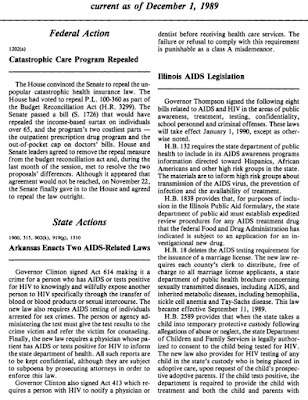 Compounding the stigma and fear of gays and our sexual relations, and the added burden of HIV transmission stemming from outrageous neglect of prevention and education programs, Gov. Clinton in November 1989 signed one of the worst criminal transmission laws in the nation.

The law made it a Class A felony for a poz person to have penetrative sex with another person without first disclosing their HIV status. If convicted, sentences required no less than six years and a maximum of 30 years in prison. This law is still on the books and an unknown number of persons convicted under it currently are inmates in penitentiaries serving time.

Public records obtained from Arkansas prosecutors by advocates affiliated with the Sero Project, a nonprofit of HIV poz folks and allies fighting stigma and injustice, while limited in scope nevertheless offer details worth our attention.

Of caseloads made public for about a dozen persons, the average sentence meted out was 10 years and three people got 20 years while only one received six years in prison. I believe these cases represent a mere fraction of all convictions in Arkansas.

After extensive searching, I’ve come across nothing showing Hillary opposed the HIV criminalization law before her husband signed it or after going into effect. Over the course of their final nine years of holding the reins of power in Little Rock and of widespread HIV and sodomy criminal enforcement, Hillary expended no political capital on us or our concerns.

Just how missing-in-action on AIDS were the Clintons up to September 1990? An extended editorial at the time in Little Rock’s alternative weekly The Spectrum headlined “Time For An AIDS Policy” completely omits the Clintons, indicating they weren’t known for doing the right thing on HIV matters.

It noted: “The incidence of reported AIDS in Arkansas is up 158 percent over last year … by the end of September, there will be 147 cases on the books as compared to 57 this same time last year. … The Department of Health Services just completely cut Medicaid benefits to 10 of 13 Arkansans who take AZT … The Arkansas Department of Corrections simply failed to reapply for its grants that paid for a full-time AIDS education coordinator … Blacks in Arkansas have an alarmingly disproportionate incidence of AIDS; about 23 percent of AIDS cases are among blacks who make up 16.3 percent of the population.” 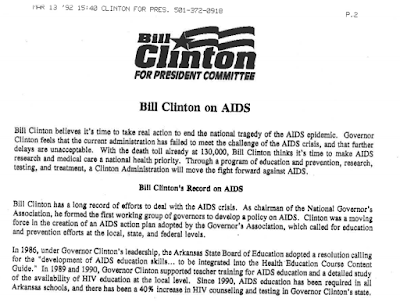 With primaries underway, the Clinton for President Committee in early March 1992 issued a one-page position paper on AIDS that is noteworthy because it lacks any compelling achievement on his part directly assisting people with AIDS or those at-risk.

It reads: “As chairman of the National Governor’s Association, he formed the first working group of governors to develop a policy on AIDS … In 1986, under Governor Clinton’s leadership, the Arkansas State Board of Education adoption a resolution calling for the ‘development of AIDS educations skills … to be integrated into the Health Education Course Content Guide’."

Granted, a panel and a resolution connected to Bill during the first five years of the plague are something, they’re exceedingly underwhelming and pitiful and force me to wonder where was Hillary and did she do a damn thing about HIV in Little Rock?

In her apology after her erroneous Nancy Reagan comment generated pain, Hillary wrote: “I’ve always tried to do my part in the fight against this disease, and the stigma and pain that accompanies it. At the 1992 Democratic National Convention, when my husband accepted the nomination for president, we marked a break with the past by having two HIV-positive speakers — the first time that ever happened at a national convention.”

Echoes of Bill’s 1992 campaign AIDS position paper — long on platitudes, short on substance. Given how abysmal her HIV Arkansas record is, Hillary’s apology omitting anything she may have done prior to the presidential campaign is quite telling. 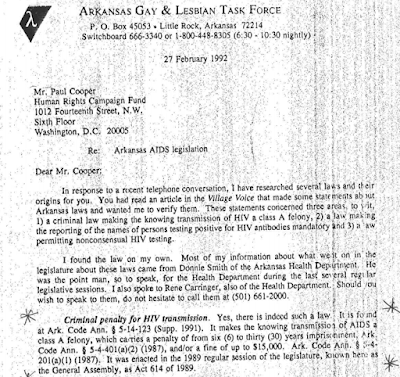 A four-page policy assessment paper from the Arkansas Gay and Lesbian Task Force in February 1992 to the Human Rights Campaign about the state’s AIDS legislation and response to the epidemic offers more on the issue.

On top of the bad laws, sodomy arrests and prosecutions and lack of initiative from the Clintons, the task force shed light regarding no state funds appropriated for AIDS: “[O]nly federal money was spent here until 1991 [when three HIV educators for community-based organizations for the entire state were hired] . . . $30,000 in 1992 was money to be used for testing and counseling that the federal government quit sending and it came from the Governor’s Emergency Release Fund.”

Most galling, Hillary said: “We should call on states to reform outdated and stigmatizing HIV criminalization laws.” If only Bill hadn’t signed Arkansas’s criminalization law she would have one less state to call on to amend, maybe even repeal, these lock-’em-up laws.

What’s needed now, just as we’ve weighed Mrs. Reagan’s HIV resume, is to apply the same degree of accountability to Mrs. Clinton especially during her Little Rock years.
Posted by Unknown at 2:50 PM
Email ThisBlogThis!Share to TwitterShare to FacebookShare to Pinterest

Thank you, Mike, for looking into this subject and publishing the results. I find this extremely valuable. I've never been enthusiastic about Hillary as a candidate, but this information puts me squarely in Bernie's camp... Hmmmm. I wonder what Bernie's history is like on this subject.