In their last edition before expiring as a weekly print newspaper, the progressives supposedly with a mighty clue on how San Francisco politics works at the Bay Guardian endorsed conservative Supervisor Scott Wiener in his 2014 reelection bid. That was the year I was on the ballot challenging Wiener and knew, after years of criticizing Bay Guardian editors and writers, I wouldn't get their endorsement. 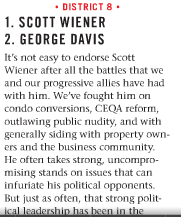 But what the eff about them backing Wiener? Nail in the paper's coffin.

Wiener on Monday, April 24, was quoted thus in the New York Times about an epidemic of smashed cars and robberies:

He says some people need a half-year in jail to think about their bad behavior if it's for burglaries and damaging private property, but Wiener is not pushing the corrupt district attorney George Gascon to indict and prosecute, never mind demand prison sentences, for the San Francisco cops who've killed civilians.

It's time for the former Bay Guardian editors, including clueless Tim Redmond who ran the paper into the ground before he was forced out which was before the 2014 endorsement of Wiener was published, to publicly apologize for saying he deserved votes and second supervisorial term.

This ambitious politician hasn't come around to any sort of progressive agenda since the Bay Guardian threw its weight behind him, and here's what Redmond said at his blog on April 18 regarding Wiener's latest effort at the Board of Supervisors to undermine law enforcement reform:

"The supes were considering a resolution endorsing a bill by Sup. Mark Leno that would mandate more police accountability. [...] the supe who tried to derail the resolution was Scott Wiener, who has been a close Leno ally and whom Leno has endorsed to replace him in the state Senate. I was surprised when I was first reporting on this that Wiener wasn’t among the supes who had signed onto the endorsement resolution. [...] But Wiener couldn’t bring himself to support the bill."

Clueless Redmond was surprised at Wiener opposing a mild cop accountability resolution? Such progressive thinking is a big reason why the Mission and San Francisco as we knew it has been lost forever.

How about that apology, former Bay Guardianistas? It's not too late to absolve yourselves of the sin of backing Wiener.
Posted by Unknown at 11:18 PM
Email ThisBlogThis!Share to TwitterShare to FacebookShare to Pinterest