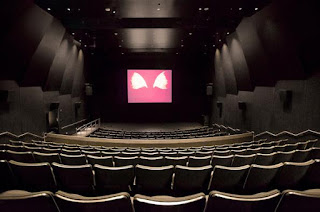 Quite a bit of good came from an audio glitch at the Friday, April 15, at the Berkeley Art Museum/Pacific Film Archive screening of "One Floor Below" from Romanian director Radu Muntean. We heard background sounds but all dialogue was muted, for the opening ten minutes.

People grumbled and since no usher or the house manager made an announcement, a few of us spoke to the ushers in the hallway. Told they were aware of the problem and summoning the house manager and the projectionist was trying to stop the glitch, most of us returned to our seats but other folks streamed out.

Maybe fifteen-minutes went by for the entire episode including the house manager appearing to share the bad news that the screening was cancelled, but that we'd get passes or refunds. Much disappointment among the audience.

Thanks to the technical difficulty, I introduced myself to the house manager Emily, who was receptive to my suggestions to improve the cinema-going experience:

1. Stay in the theater for ten or fifteen minutes at the start to make sure the sound and projection, and when necessary the subtitles, are are functioning properly.

2. If problems develop, be quick to inform the audience.

3. When a screening must be cancelled and there are other showings of the same film, mention that to us.

A Romanian woman named Aleen and I chatted, as we were given comps to another screening. She drove an hour from the South Bay and we spent an hour afterward at a cafe across from the BAMPFA home sitting tea and chatting about the cinema.

We were joined by a Berkeley couple and the four of us enjoyed a great talk about the BAMPFA facility and the fabulous movie offerings.

All four of us felt it was positive to spend time conversing about our love of films, and that the episode would be a learning lesson or few for the BAMPFA staff.

Much praise to Emily and other BAMPFA folks who were gracious about giving everyone a comp and apologizing for the glitch.

When I returned for the Sunday, April 17, screening of "One Floor Below", I saw the couple again who, like me, were pleased we had an opportunity to see the film, which was terrific, wickedly funny and a puzzling crime anti-thriller.

So, not only was it good to engage in conversation with other cineastes and the house manager but also fine to be part of BAMPFA's ironing out of the wrinkles in its new home.

Speaking of which, the new theater is a dream venue with state-of-art projection and sound systems, roomy and comfortable seats, some films shown on 16mm and 35mm, and a robust and eclectic selection of movies.

Cheers all around for those elements and one more new part of the programming: multiple screenings of the same film. This was especially welcome with "One Floor Below" and having another chance to see it after the cancelled screening.

Have you been to the new BAMPFA yet? If yes, you know how wonderful it is and if not, check out the new digs soon and often.

Posted by Unknown at 5:10 PM
Email ThisBlogThis!Share to TwitterShare to FacebookShare to Pinterest