The corrupt district attorney and former chief of the San Francisco police force, George Gascon, who's gunning to replace attorney general if she's elected to the U.S. Senate, doesn't work or live at Valencia and 17th Streets. 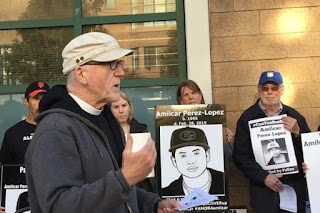 A group of diverse law enforcement accountability activists gathered at the Mission police station yesterday to demand the DA indict the killer-cops who fatally shot Amilcar Perez-Lopez a year ago. The DA's office is at the Hall of Justice at 850 Bryant Street and Gascon doesn't live at the site of the protest.

According to a story by Laura Wenus, who snapped the pic above, of the Mission Local news site, which omitted those facts.

She writes: "The organizers, many of whom attend the Episcopal Church of St. John the Evangelist or are members of the advocacy group Faith in Action, have decided to hold silent but highly visible vigils in front of Mission Police Station every week until District Attorney George Gascón decides whether or not he will bring criminal charges against the officers who shot Perez-Lopez."

Well, they weren't silent as evidenced in the video shot by Wenus and posted here. She didn't report if she queried the organizers about why they're not at Gascon's office or home.

Going to the police station instead of the DA's place of business is akin to protesting Donald Trump at Ted Cruz's headquarter.

Also this week, more bad law enforcement accountability from the Mario Woods Coalition. He was killed by SFPD officers in December and this coalition never directly names Gascon as the official who should charge the cops with Woods' death. 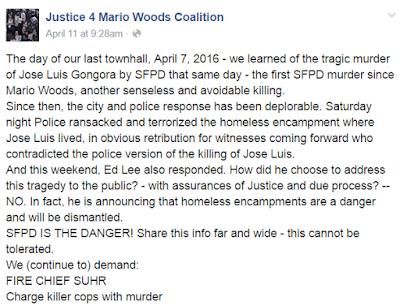 At their Facebook page, the coalition simply calls for charging the officers. No mention of the DA's office or Gascon, yet plenty of naming of the SFPD and chief Greg Suhr.

Then we have 48Hills.com's Tim "access is all important to me" Redmond promoting a recent listening session of Gascon's alleged SFPD accountability and transparency panel.

No hard questions from Redmond about the panel or Gascon's failure to indict in either the Woods or Perez-Lopez fatalities. Redmond likes one of the hand-picked-by-Gason judges on the panel and he reveals his incredible naivete stating this:

"[T]here's a real chance to tell people who might be in a position to make some (public, I hope) recommendations for change . . ."

Yeah, and there's a real chance you can win the Lotto too. And what is Redmond's b.s. about people who _might_ have power to make, yawn, recommendations for change? Goody for him to hope this public official, corrupt Gascon, will make public whatever his panel recommends.

With the like of the Perez-Lopez and Woods coalitions and progressive leaders like Redmond engaging in bad law enforcement accountability organizing, it's no wonder Gascon let's cops get away with murder.
Posted by Unknown at 9:37 AM
Email ThisBlogThis!Share to TwitterShare to FacebookShare to Pinterest