Corrupt San Francisco district attorney George Gascon a year ago, established a power-less panel ostensibly to look at accountability and transparency within the police department.

It's a joke, considering the Sunshine Ordinance Task Force castigated Gascon for failing to respond to any referring of open govt violations including not providing any, um, accountability as to why he take no action. Gascon has several times been found non-compliant with transparency statutes, so it's hypocritical of him to control this panel.

In keeping with being a foe of open govt, Gascon has not released any info about who is paying for the panel and what amounts are being raised for its work. Quite telling that Gascon refuses to indict any SFPD officer for killing Alex Nieto or Mario Woods or any other civilian fatally shot by a cop, but he's a panel to buff up his resume.

Current state attorney general Kamala Harris hasn't been elected to the U.S. Senate yet, and Gascon is already laying the p.r. groundwork to lobby Gov. Brown to appoint him to replace her, if she's on her way to Washington after November. 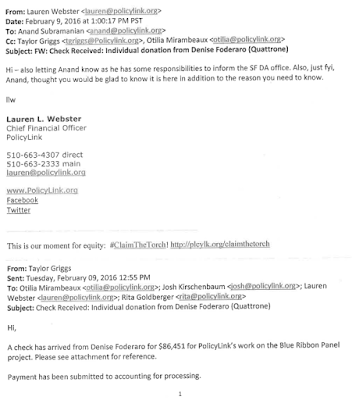 My public records request to Gascon produced this February 9, 2016, email between staffers at the PolicyLink nonprofit in Oakland showing they received $86,000 from a Denise Foderaro for their work with the panel.

According to a 2003 SF Chronicle story, Foderaro is a lawyer and she and her investment banker husband faced criminal charges over alleged shady real estate and tax dealings on several luxury properties they owned.

How much of a say does Foderaro have over Gascon's panel in exchange for her $86,000 donation? 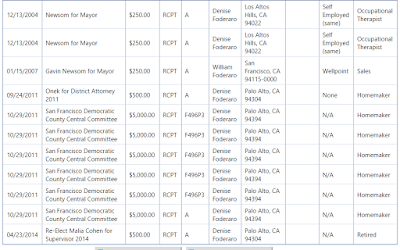 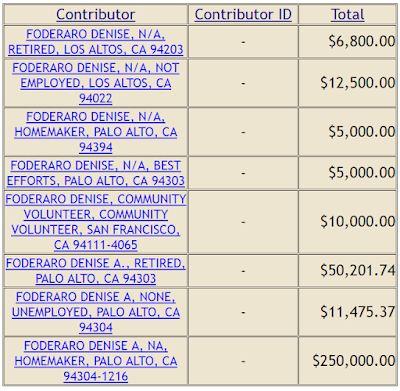 According to the San Francisco Ethics Commission and the California Secretary of State's political donations' online records, she has deep pockets and likes Democratic pols and PACs. No donations from her to Gascon's official political campaigns, have turned up. 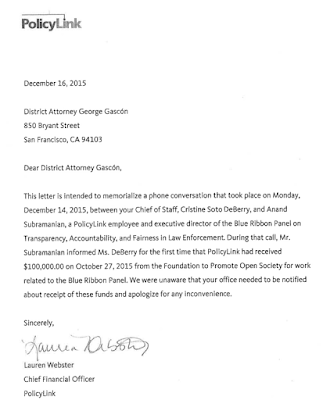 The PolicyLink group, which is profiting handsomely in terms of grants coming in and glowing media attention, received a check for $100,000 in October from global financial powerhouse George Soros's Foundation to Promote Open Society.

A PolicyLink memo reveals they didn't disclose the Soros foundation's donations until December. Lack of transparency karma coming back to kick Gascon's butt! 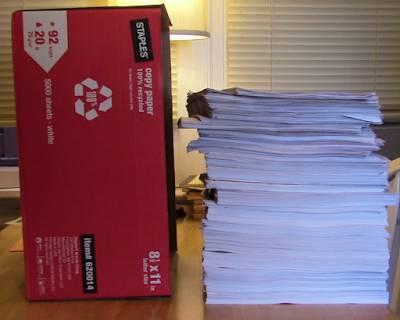 As I blogged about last week, Gascon refused to scan 15,000 pages of records responsive to my open govt request, and he wouldn't separate the document by subject - funders, contracts, SFPD emails, etc - so I don't know if Foderaro and Soros are the only funders of his panel. I've not read every page of what was released.

For now, we know that Gascon's panel has taken in $186,000 for its work. It's incumbent upon the corrupt and foe of sunshine district attorney to get accountable and transparent and disclose exactly how much money has come, name the sources and explain what the money is to be used for.

Think Gascon will do that?

Posted by Unknown at 12:58 PM
Email ThisBlogThis!Share to TwitterShare to FacebookShare to Pinterest