After the first full day of programming for the 59th San Francisco International Film Festival in the Mission District on Friday, April 22, I sense a gentle footprint establishing itself and adding vibrancy to the neighborhood thanks to use of the Alama Drafthouse, the Victoria and Roxie theaters and the film lounge situated at Valencia and 21st Street. 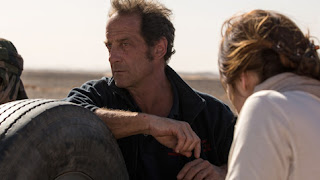 I've walked out on two films so far. The first, from France and Belgium, "The White Knights", about a hard-charging NGO executive director mucking up an orphan rescue in an unnamed African country and hostilities between local villagers and outsiders predictably flare up.

Terrific acting and desert scenery couldn't hold my attention to a bland plot and tiresome implausibilities stacking up every five minutes, and I left the press screening forty minutes into the film. 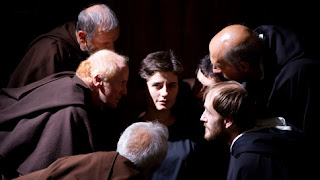 The second early exit was at Marco Bellochio's new Italian film "Blood of My Blood". An anemic disappointment from Bellocchio, whose 2009 work "Vincere" was a stirring melodrama about Il Duce Mussolini's first wife who went mad, full of passion and an engaging story.

His new movie is a dull costume drama told in two tales with the initial part set in the 17th century, at a cloister where a young woman is on trial for Satanism. A nobleman and priest falls in love with her, and a bloodless production lumbers on as they plan an escape. Sumptuous costumes were too clean and wrinkle-free for the period, but of more interest than the narrative. 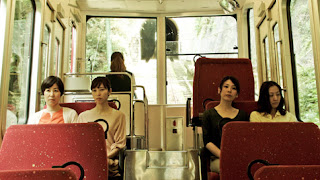 My third choice was the excellent five-hour and thirty-minute Japanese "Happy Hour" saga following four 30-something female friends over a year of changes, good and bad, for all concerned.

A compulsive narrative, sleek production design and a surface coolness to the images that calmly illustrates the passions and emotions of the women and their mates. Contemporary life, artistic and personal fulfillment, romantic failures and employment challenges, and supporting each other through it all, these fully developed female characters are complex creatures.

The only dull patch was an extended author's reading in the fourth hour. Engaging acting from each actress made us care what happened to their characters.

Proud to report an audience of fifty caught it at the Roxie on Friday evening, with many of us agreeing afterward it was well worth our time.

More info on all the programs, films and guests, and to purchase ticket, are found here. What are you seeing at the festival?

(All photos courtesy of the San Francisco Film Society.)
Posted by Unknown at 2:12 PM
Email ThisBlogThis!Share to TwitterShare to FacebookShare to Pinterest