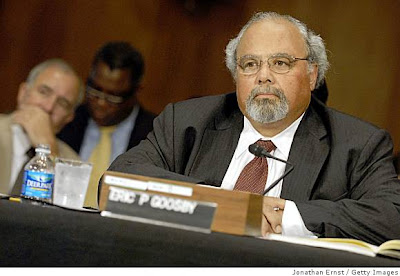 Many moons ago, three gay men led the charge to force the San Francisco AIDS Foundation to be accountable and transparent regarding the annual walk-a-thon that raises millions of dollars, ostensibly for local service orgs.

Michael Lauro of the now-defunct ACT UP/Golden Gate chapter, the late Mike Salinas when he was editor of the Bay Area Reporter, and the still active independent watchdog Patrick Monette-Shaw, in the late 1990s/early 2000s followed the money brought in through the SF AIDS Foundation's leadership of the walk.

What they found was not a pretty picture, and for a while, the foundation was listening to critics and sharing more funds with local orgs. It now appears the foundation is back to its shameful old tricks of using deceptive promotional practices and harming SF and Bay Area service providers.

Today's New York Times carries a story about Sunday's AIDS Walk, and the same old questions of foundation leaders running the fundraiser in a less-than-transparent way, with too much local revenue diverted to foreign HIV programs affiliated with the foundation's global non-profit arm, the Pangaea Global AIDS Foundation.

Pangaea was headed by Dr. Eric Goosby when the big amounts of local dollars were flowing out of here and into his global foundation. In January 2009, when Goosby was named to be the U.S. HIV/AIDS Ambassador for the State Department, I blogged about his ever-increasing compensation package at Pangaea, as programs were cut.

I'm pleased the Times is covering the renewed problems with the AIDS walk, and I can understand space and other limitations preclude citing the historical advocacy of Lauro, Salinas and Monette-Shaw, but there is no excuse for the paper to omit Goosby's name, if only because of his current international leadership position on behalf of the entire American nation.

Let's see if the SF Chronicle, which has been notoriously unable to bring itself to cast a critical eye at the SF AIDS Foundation and its (sometimes misguided) stewardship of HIV funds and community events, performs some catch-up journalism off the Times piece, after Sunday's walk. There cannot be too much sunshine over AIDS Inc in this town.

While a majority of the money collected at the event goes to the San Francisco AIDS Foundation itself, only a small fraction in recent years has actually gone to those other local H.I.V./AIDS charities.

Instead, an analysis of government tax filings shows that a significant part of past donations has gone to an international AIDS charity — as much as $1 million during one recent year. By comparison, that same year 26 local organizations split $340,000.

The disparity — foreign spending versus local — has led to concerns that the walk’s benefits to Bay Area charities have been misrepresented, according to leaders in the local H.I.V./AIDS care community who would not speak publicly for fear of losing the financing they currently get. [...]

What a sad commentary on the state of AIDS Inc in San Francisco. Executives and staffers at other orgs are frightened into silence about accountability. That says much about what is wrong with the foundation's approaching to collaboration, a longstanding problem.

In 2001 the foundation created the Pangaea Global AIDS Foundation, a separate nonprofit focused on H.I.V./AIDS in Cambodia, China, Ukraine and five countries in Africa. The two foundations share office space and a few employees.

Pangaea reported $3 million in expenses for the fiscal year ending June 30, 2008, the most recent tax return made public. [...]

This section is where the Times had a responsibility to inform readers of who the director of Pangaea was at this time: Eric Goosby.

That same year, according to I.R.S. records, of the $1.7 million the AIDS Foundation gave in grants to outside organizations, $1 million, or roughly 57 percent, went to Pangaea. The remaining money was apportioned to 62 Bay Area nonprofits, with most receiving $10,000 or less. The second-largest grant that year was $65,000 to the AIDS Health Project at the University of California, San Francisco; the smallest was $756 to the California Prevention and Education Project in Oakland. The walk in that fiscal year raised $4.4 million.

Yep, and I expect this article and the figures contained therein are going to reverberate for quite some time after the AIDS walk this weekend.

Posted by Unknown at 10:29 AM
Email ThisBlogThis!Share to TwitterShare to FacebookShare to Pinterest

As Wisconsin's AIDS Network in Madison prepare for their annual AIDS Ride they also continue to charade of client benefit from the 300,000 plus the ride usually generates. Through open records requests and an analysis of the data we have shown that 59 percent of fundraiser dollars fund---you guessed it---fundraising and administrative costs.

The agency has refused to provide any information on the ride to the public and instead attacks those of us who raise issues as being demented and out to harm the AIDS community.

I'm heartened that the New York Times is covering the story. I will be following what spin the Walk organizers put on the Times article.

Thanks Michael for posting about this. It give me added motivation to keep spreading the truth about AID Inc in little old Madison, WI