It was five years ago on July 19 that Mahmoud Asgari, blindfolded left, and Ayaz Marhoni, blindfolded right, two gay teenagers, were executed by hanging in the main square of Mashad, Iran. A handful of small demonstrations took place in 2005 in Europe and the U.S. over the deaths, and in 2006, activists in more than 19 cities around the globe, including Tehran, staged commemorative vigils and speak outs.

I am proud that my city of San Francisco played a vital role in focusing attention on the hangings, and that we also stood up to the two biggest obstacles at the time, in organizing global same-day actions: Scott Long of Human Rights Watch and Paula Ettelbrick, formerly of the International G/L Human Rights Commission. The stain of hindrance still blots HRW and IGLHRC, and their poor track records of working with global gay activists.

From those horrific hangings on July 19, 2005, sustained worldwide condemnation deplored the Islamic Republic of Iran for killing Asgari and Marhoni, and inside the country, gays bravely took further steps underground to organize and memorialize the executions. 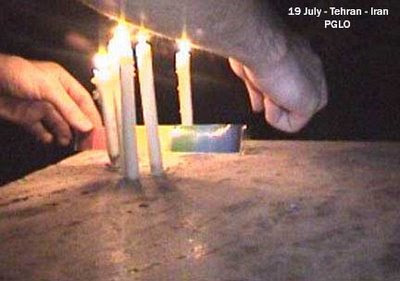 This photo from 2006 continues to give me chills, knowing the great risks gay Iranians face everyday in their country, and the courage it took to join in the global day of solidarity that year. Again, I give many thanks to all of the organizers and participants over the years who have protested the executions and also stood with Iranian gays.

Click here and scroll down to view what I believe is the most comprehensive collection of photos from the hangings in Mashad on July 19, 2005.

If you have a blog, or engage in social networking, let your readers and friends know what happened on this day five years ago in Mashad, Iran. Please give a moment's contemplation on behalf of the cruelties faced by gay Iranians and gay people around the world.
Posted by Unknown at 9:36 PM
Email ThisBlogThis!Share to TwitterShare to FacebookShare to Pinterest