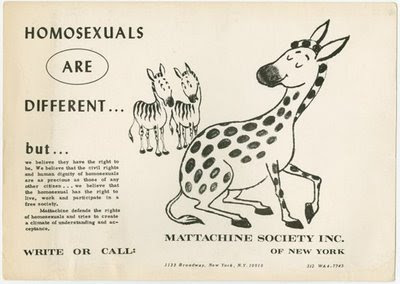 (A poster from the 1960s.)
The good folks at GovernmentAttic.com, through a Freedom of Information Act request, have obtained the 947-page Federal Bureau of Investigation file on the Mattachine Society, a gay lib org started in the 1950s by a handful of brave homosexuals, and the entire file is now available at the site for everyone to read.

I'm looking forward to reading the full document, and right now want to share two highlights I found while skimming the file.

From the file's first page:

On May 29, 1953, Confidential Informant [redacted] of known reliability who is a sex deviate contacted [Special Agent] ROBERT KARL. The Informant made available a copy of the Publication entitled "ONE" [...]

Further review of the Publication indicates it is written for Sex Deviates [...]

The Bureau's attention is directed to Pages 9 and 10 of the publication. The article is entitled "Are You Now or have you ever been a Homosexual" [...]

I simply can't imagine the courage it took in those dark times, to come out of the closet, link up with other homosexuals, risk losing employment or housing or the love of family and friend, and also publish a newsletter demanding respect and tolerance.

The debt we owe the founding fathers and mothers of the modern American gay movement is enormous, and we owe it to them, and ourselves, to properly honor these pioneers.

Of course, there's one trouble-maker whose name appears lots of times in the file: Dr. Franklin E. Kameny. Let's once and for all disabuse ourselves that before the Stonewall Riots all homosexuals were sissies afraid to challenged the government.

Read about this act of provocation through the U.S. Postal Service. From page 694, an FBI memo dated August 7, 1964:

Kameny arrived at 12:35 p.m., accompanied by Robert King, Editor of the "Gazette" of the "Mattachine Society of Washington," and both were interviewed by [Special Agents] [redacted] and [redacted] of the Crime Research Section.

Kameny and King were informed that the presence of Mr. Hoover's name on their mailing list is considered offensive and they were requested to delete his name from this list. Kameny and King pointed out that their purpose in sending such material to governmental officials such as the Director was to attempt to influence these officials to become more understanding of of the aims of their group.

They stated that the President, the Attorney General, other members of the President's Cabinet and members of congress are included in their mailing list for this reason.

They stated further that they realize that much of their material is probably promptly thrown into the waste basket. [...]

Our forefathers were waving a red flag before the bulls of the federal government with their publication, inviting attention from politicians. On top of that, when called in by the FBI for an interrogation about their publication and who was on their mailing list, Kameny and King didn't cower and whimper. No, the proud homosexuals used humor to stand up for dignity of gays and lesbians.

BTW, when will President Obama bestow the Medal of Freedom on Kameny? This American patriot deserves the medal while he's still alive.

Thank you, members of the Mattachine Society, for your incredibly work that has directly and greatly benefited me and so many others. And many thanks to GovernmentAttic.org for getting this file and sharing it with us.
Posted by Unknown at 11:54 AM
Email ThisBlogThis!Share to TwitterShare to FacebookShare to Pinterest

They had HUGE STEEL BALLS to do what they did, back in the day!

I spent a few hours browsing through these 900+ pages (exciting life I lead...). Notable finds: Hoover and Tolson (a couple in a long-term relationship) were informed and involved in some of the decision-making and it appears Frank Kameny delighted in sending a free subscription to them (even after he was hauled in and asked to stop). Frank Kameny is God.

What bothered the FBI for years was the insinuation, made by a member of the LA Mattachine, that there were gays in the FBI. Notice that the distribution list stamped on some of the memos includes the name "Felt", who was eventually unmasked as the Deep Throat informant in the Watergate affair.

Also note how much more lighthearted and frank the Drum magazine is (compared with issues of ONE) - maybe, in part, because the supreme court had recently ruled that mailing such material was not prohibited under obscenity laws.