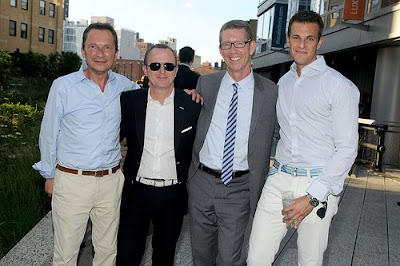 (Brian Ellner, far right, with friends, including Richard Socarides on the extreme left.)
Allow me to plead much ignorance about the condition of the gay marriage effort, the over all community's political health, and many of the key actors in New York State's gay orgs and hangers-on.

Having disclosed this factor, let me now say, from across the country, it looks as though the Human Rights Campaign, an org not known for clear successes on gay marriage or anything at the state level, has blasted a new hole in the head of the New York community.

Brian Ellner, who until this week worked for the New York City Department of Education, will oversee the Campaign for New York Marriage, which is to be financed by the Human Rights Campaign, a Washington-based lobbying group for gay rights.

Mr. Ellner’s appointment will be announced by the group on Friday. It represents a vindication of sorts for Mr. Ellner, who was the top candidate to run the Empire State Pride Agenda, the state’s leading gay rights group. He abruptly withdrew from consideration several weeks ago after some gay advocates questioned his links to Mayor Michael R. Bloomberg, a major donor to the Republican Party. [...]

Showing their Astroturf roots, several HRC employees and others with a vested interested in the org, are hailing the further splintering of the NY community in comments at the Times' blog.

Am I the only one who finds it telling that this news came out not only on a Friday afternoon, the traditional dumping ground for news the govt and political orgs who have to get out bad news and do so when the press and public on more focused on weekend getaways, but that it was a Friday before a national holiday?

HRC's release paints the rosiest scenario possible of coming cooperation among the orgs:

HRC will work collaboratively with Fight Back New York, Empire State Pride Agenda, Freedom to Marry and Marriage Equality New York. With an eye toward efficiency and focus, the organizations are committed to leveraging their individual impact through strategic collaboration. [...]

They also claim to have 70,000 members in the Empire State, a figure I suspect is wildly inflated. It's akin to all the well-hung M4M cruisers on Craigslist.

Despite the promise to all work together, I don't expect the egos at the existing orgs or the new one are going to actually coordinate plans and all of a sudden become effective.

Regarding Ellner, I checked his FEC records and the only donation that turned up was a $500 check to Sen. John Kerry's losing presidential effort in 2004.

Oddly, for a man leading a state gay marriage fight, Ellner apparently made no donations to two recently high profile state ballot propositions. In Maine, no donations from him show up in the state's campaign archive. The SF Chronicle's Prop 8 donations' search engine, using CA campaign records, shows no Ellner contributions to stop the anti-gay marriage initiative in 2008.

Lack of donations to other states' effort at the ballot box is not a big deal, and Ellner may have contributed time to ME and CA campaigns. Still, in the interests of fully researching our gay inc leaders, I'm sharing the info.

This 4th of July weekend, color me red, white and true-blue skeptical this HRC sub-org in NY, with an A-Gay leader possessing questionable support beyond a tight circle of elite, moneyed, politically-connected gays, is actually going to accomplish tangible good things for the local community.

Posted by Unknown at 4:01 PM
Email ThisBlogThis!Share to TwitterShare to FacebookShare to Pinterest

HRC, who endorsed Al D'Amato over Chuck Schumer is now going to weigh in in Albany about marriage? Really?