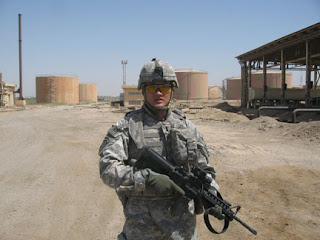 (Former Lt. Choi serving as a soldier in Iraq in July 2007, fighting the Bush/Cheney war for oil. Notice the oil containers in the background and the gun in Choi hands. What do oil, guns and illegal wars have to do with gay liberation? Photo credit: Courtesy of Choi.)
Over at the LezGetReal site, which I only recently started reading because the lesbians who run it have smart and snarky attitudes, writer Melanie Nathan has two articles up raising questions about the motivations, and speaking fees, of former soldier Dan Choi.

Later I found out that Dan Choi has an agent. (Gotham Artists).

This led me to question why an agent? Activists put the cause first – they struggle financially, are able to fund their own activism or are openly paid via non-profits with Board responsibility at their helm; they don’t need agents. And they do not make deals for their activism that involve making money. [...]

Those are provocative views, and a week later, Melanie has a follow up piece, and she shares an email from an anonymous source about Dan's fees and demands at a speaking engagement in Texas back in April:

He required Texas A & M to pay him $7500 and then tacked on an additional $2300 for travel expenses. He also required that they fly him first class. His agent is also a miserable human being. Since this was done through a school I’m sure there are records of it. [...]

Melanie uses that alleged college speaking fee as a jumping off point to expound on related matters:

Dan has had ample opportunity to answer questions over some time now posed by Lezgetreal and to come on the record – an interview – whatever! Yet he has failed to come forward. Instead he continues to forage for publicity, like the Ring deal mentioned above. Publicity is okay if it is purely about DADT.

But my question is does he take his risks and jump on stages, hunger strike for a few days and tie himself to the White House to up his price? Or does he do it all purely for the repeal of DADT. [...]

I contacted an editor at Texas A & M's student newspaper, the Battalion, Ian McPhail, to see what he knew about speaking fees at the university, and if he would check into whether Dan was compensated. Ian replied:

I am looking into your question on Dan Choi, however none of my sources have been able to contact me back (it is the summer). I will let you know as soon as I hear something, but it might be a day or so.

Once I hear from Ian, I'll share his info. Until then, cruise on over to the LezGetReal site and check out all of the essays and comments.
Posted by Unknown at 11:16 AM
Email ThisBlogThis!Share to TwitterShare to FacebookShare to Pinterest

I already checked with a source involved in the deal with CHoi, he confirmed that Dan was paid. He told me that his TX AE has a budget for speakers and expects to pay. They dealt only with the Agent. I was told that The Tech Kids never had a budget. The rest of my article speaks for itself. Further the source mentioned that the numbers may not be exact but I was told they were close. I promised anonymity. The person spoke highly of Dan Choi saying he was very nice and that he did not ask for green M & M's.