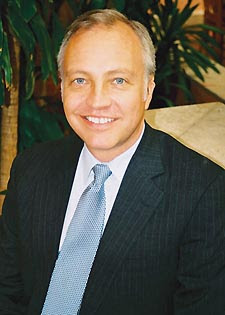 The head of the rights program at the very well-endowed Haas Jr Fund is Matt Foreman, a longtime operative of the Gay Inc machinery. He's been in San Francisco for two years, playing a crucial role in local and state politics because of the big checks he writes and he's not held a town hall meeting during this time.

I asked him once to put on such a forum, after we lost Prop 8, he rejected my request. Said it was not in his purview to interact with the local community in such a fashion. Matt occasionally drops think-pieces on the community on a group blog, and provides no sunshine that I'm aware of over his duties at and the impact of the major influential funder he works for.

Last month Matt organized a morning news conference in San Francisco at City Hall to promote his fund's supposed new research related to gay marriages, and that's about the extent of anything on his part approaching transparent community engagement. Why he's reluctant (or fearful?) to organize public forums, at night, for the wider community, especially folks who don't work at orgs receiving grants from his fund, is a mystery, in keeping with Gay Inc principles.

When he comments on blogs, it's generally done to stifle discussion. He's resistant to even talking about more chat between activists not buying his product, as he recently did after snark was generated over Matt's "new" gay marriage polling by longtime NGLTF consultant Patrick Egan. That polling was the same "old" line of his that all the millions Gay Inc leaders waste on gay-invisibility driven ads during gay marriage props don't change minds, talking to neighbors does.

On Queerty he wrote:

That public education work has to be done NOW – not in the hothouse of a campaign. That's the point Geoff [Kors] made. Why argue with that?

One reason is because anything Matt and Geoff present to the community, after their botched leadership on Prop 8, about the California gay agenda for the next few years has to be deeply scrutinized. Instead of embracing the questions raised at Queerty and from other quarters, and beginning respectful community-wide dialog, Matt is not the least bit interested in ongoing public debate. It's all about just following the orders of him and his Gay Inc minions.

Matt also is a key leader in the Let California Ring (LCR) org, which is an off-shoot of Equality California. LCR receives money from the fund, and is comprised of reps from National Center for Lesbian Rights, GLAAD, EQCA, and people of color orgs, many of which have received millions from the fund. Former staffers of NGLTF have seats on the LCR executive committee.

The LCR folks never hold open forums with the community, even though it has positioned itself as CA's gay marriage prop think-tank. If these leaders learned any genuine lessons of what they did wrong in 2008 on Prop 8, and have fundamentally changed since, it is not only display through LCR. It's pretty much the same old folks from the same old orgs doing the same kind of losing organizing and strategizing.

On top of his Haas Jr Fund and LCR non-transparency and non-engagement, another org Matt is a key leader of, the New Beginning Initiative, is also all about operating in the dark without the eyes, ears and mouths of blogger, reporters and activists.

In late January, Queerty broke the news about his initiative:

And here's the the most curious part: The new project "seeks no attribution for its role." Yes, they want to remain anonymous! They don't want anybody knowing who's pulling the puppet strings! [...]

But you know what this also means? ZERO TRANSPARENCY. [...]

Thus far, all we know is NGLTF's project director Matt Foreman will be leading the new group, which officially launches Feb. 1. [...]

But nothing about this project shows organizers have any new ways of thinking, any revolutionary ideas about activism, or anything planned that won't just be rinsing and repeating the same failed tactics as they've tried before.

Wow, it's been around seven months and not a single community forum held. That sort of non-democratic M.O. is being emulated perfectly by GetEQUAL, the Junior League of Gay Inc. How typical and boring of Matt and his Gay Inc cronies with their alleged new beginning, which smells suspiciously like gay-ja vu all over again.

At the NGLTF page for the initiative is this ironic statement:

We would like to thank the Open Society Institute for their generous funding of this initiative.

These folks and org do everything they can to keep pretty much everything about their stewardship of community dollars, resources and political capital behind closed doors, and yet the George Soros-funded open institute gives this supposed new initiative funding. BTW, displaying even more non-transparency, the initiative organizers have not disclosed how much funding was provided by the open society.

If anyone knows whether Matt and the initiative have done anything of substance benefiting the larger movement and its millions of members, do let me know.

There is one more important component of Gay Inc in which Matt is a key leader. A recent editorial and story in the Washington Blade detail his involvement with another well-endowed foundation:

[T]here’s another group that doesn’t get nearly the amount of media attention as HRC that also deserves scrutiny: Gill Action Fund and its separate entity, Political OutGiving. [...] Gill himself is notoriously press shy and the organization works behind the scenes to elect pro-LGBT political candidates across the country and to defeat anti-gay figures. [...]

And here’s where OutGiving’s secrecy does a disservice to the movement at large: Real progress won’t come as long as politicians, particularly Democrats, can rely on big gay money even after doing nothing to earn it. [...]

Sources who attended the Political OutGiving conference said that in addition to the donors, a number of prominent officials with other LGBT rights groups attended the event [including Foreman.]

From the Haas Jr Fund to Let California Ring to the New Beginning Initiative to OutGiving, Matt has a prominent seat at the table as he and a cloistered few other leaders decide our gay agenda at so many levels. But the lack of fresh voices, accountability and anything nearing serious transparency, is not an ultimately liberating and empowering plan.

The shameful dearth of regular open forums with Matt, in this city with its storied gay history, makes Harvey Milk's ghost weep at such elitism. If Harvey were in charge of such big bucks to sprinkle over the non-profits, he'd willing set up regular open meetings, to engage and empower the movement. Harvey would also happily arrange for Queer Question Time.

We gays deserve political leaders who creatively and unabashedly embrace full-community engagement and sunshine. When will Matt and his colleagues understand these vital democratic ideals are required for gay liberation?
Posted by Unknown at 3:13 PM
Email ThisBlogThis!Share to TwitterShare to FacebookShare to Pinterest