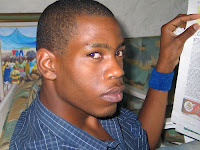 (Danesworth Boucher in an undated photo from one of his web profiles.)
At the end of October I blogged about Rudolph Gschloessl, a German national found dead in his Jamaican home, and the rumors that he was a gay man. The police launched an investigation into the crime and recently took a suspect, Danesworth Boucher, into custody. He was charged with the murder and yesterday made bail.

From the Radio Jamaica news account of recent developments in the case:

The man accused of the murder of Rudolph Gschloessl, the operator of Cafe Aubergine, was released on bail Wednesday.

Twenty-four year old Danesworth Boucher was released on $50,000 bond when he appeared before the Corporate Area Criminal Court.

Senior Magistrate Judith Pusey offered him bail after the investigator told the court that he was not opposed to the accused getting bail. [...]

Mr. Gschloessl, who was also the financial controller at King Alarm, was found dead at his Mona Heights residence in St. Andrew on October 25.

His throat was slashed.

Mr. Boucher who lived in the same house with the German national was charged after the cops determined that he was the [alleged] killer. [...]

The cops entered the house and found Mr. Gschloessl's nude body lying in a pool of blood with a knife wound to the neck.

Mr. Boucher who called the cops told them that an intruder had entered the house and committed the murder.

But the police became suspicious and following investigations he was charged. [...]

Boucher's next court appearance is on December 16. Prior to his arrest, Boucher created a web presence for himself. A Google search of his name turned up a number of interesting hits, like this Twitter account, a Facebook page, and a profile at Graduates.com.

I expect the Jamaican press will run updates when Boucher next appears before the court and I plan to continue monitoring this case. Let's hope justice is carried out for Gschloessl.

Posted by Unknown at 2:14 PM
Email ThisBlogThis!Share to TwitterShare to FacebookShare to Pinterest