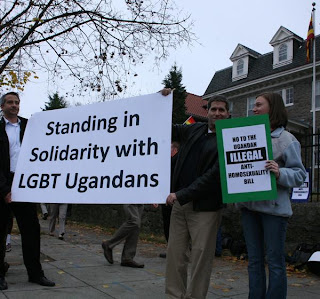 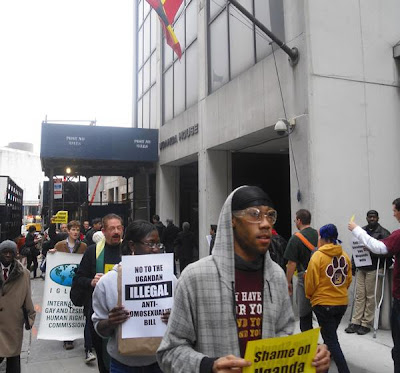 (Demonstrators outside the Ugandan mission to the UN yesterday. Photo credit: Gay City News.)
As someone who criticized the non-governmental orgs for not taking to the streets because of the draconian Anti-Homosexuality Bill under consideration in Uganda, I have a few things to say about actions this week in solidarity with the troubled gay Ugandan community: Bravo, fabulous, a job very well done, and thanks.

Yes, it really pumped my global activist blood seeing many NGO staffers and regular gay and AIDS activists picketing. The beauty and power that come when we get off our computers, come together as a group in public, target a government office during business hours, is something we need a lot more of. It doesn't always take hundreds of protesters to send a message that we demand justice and respect.

The dozens of men and women in Johannesburg, New York City and Washington, DC, deserve kudos and more attention for their activism. And thanks go out to the staff at Gay City News for their coverage.

Let's hope the coordinated same-day actions happen again, and on a monthly basis would be fine, with NGOs spearheading the organizing, at other UN missions and embassies. We all know there are many countries mistreating their gay, lesbian, bisexual, transgender and HIV positive citizens, so there are plenty of targets for monthly pickets. If our brothers and sisters in DC and NYC are considering more global gay street action, I ask that they look next at staging a picket at the Jamaican embassy.

Now, onto the reports about the actions. This info is from Juliana Cano Nieto at Human Rights Watch:

Hope everyone can join us [at the NYC action], 80 people showed up in the Johannesburg demo!

I apologize for lack of a photo thus far from the South African action, but once I get an image of that protest, I'll share it. And this reporting comes from Paul Schindler at Gay City News:

Roughly four dozen LGBT activists and allies turned out on November 19 to protest at Uganda House –– that nation’s permanent mission to the United Nations on Manhattan’s East 45th Street –– voicing their outrage about a draconian proposal to criminalize the promotion of same-sex conduct and impose the death penalty for “aggravated homosexuality.”

Amanda Lugg, the British-born lesbian advocacy director at the African Services Committee whose father is from Uganda, told the protesters that she was there “standing in solidarity” with gay, lesbian, and HIV-positive Ugandans.

The proposed anti-homosexuality law would supplement existing legal prohibitions on “carnal knowledge of any person against the order of nature” –– a measure already used to persecute openly gay men and lesbians there.

The new measure specifically criminalizes same-sex conduct –– ranging from sexual stimulation to “touching another person with the intention of committing the act of homosexuality” –– with a potential sentence of life imprisonment. [...]

Approximately 30 activists gathered outside the Ugandan Embassy in Washington, also on November 19. According to Bob Witeck, a DC public relations professional who did pro bono publicity for the Washington protest, three activists were invited inside to meet with Embassy staff.

Posted by Unknown at 10:19 AM
Email ThisBlogThis!Share to TwitterShare to FacebookShare to Pinterest