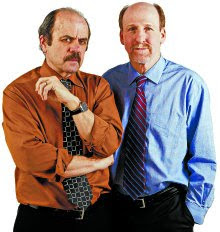 Two political gossip writers for the San Francisco Chronicle, Phil Matier and Andy Ross, have a habit of picking up stories from other sources and not crediting them.

As far as I can tell, my report is the only one out there. Demetri Moshoyannis, director of the annual leather fair, sent this note, in response to me asking if his group had issued any minutes:

There is no summary report yet from our meeting [posted on the fair's web site]. And, I certainly haven't spoken to any reporters. That said, Bevan Dufty did say that he received a media inquiry. Maybe you can ask him.

I have asked Bevan about this, but haven't heard back from him yet. I also left a message for Trapper Byrne, the editor for Matier and Ross' columns, and hope to get an answer from him today.

Astute readers of the Bay Area Reporter certainly noticed in recent years when Matier and Ross filched news from the gay paper, without properly crediting the weekly for breaking the original story. Today's Chronicle item does give credit to the BAR for the news about what led to complaints against the 2008 fair, which must be a welcome development for the BAR folks.

One political reporter, the BAR's Matthew Bajko, Tweeted last Wednesday about the upcoming Chronicle piece, and where the tent proposal originated:

# Look for a gay sex item from the Chron's Matier & Ross this weekend. The duo are asking about having a sex tent at Folsom St Fair next year. 1:35 PM Nov 25th from TwitBin

# Local blogger Michael Petrelis suggested just such a tent at a meeting Monday about the leather fairs: http://mpetrelis.blogspot.com/ 1:37 PM Nov 25th from TwitBin

Nice of Matthew to share some basic credit with readers, a concept Matier and Ross might learn about and begin to always practice, when cribbing from local bloggers.
Posted by Unknown at 2:31 PM
Email ThisBlogThis!Share to TwitterShare to FacebookShare to Pinterest

This is all too common with SF Chron. M&R used to credit local bloggers a year or so ago when repurposing stories. But now? Not so much. Frustrating.