A call to action was issued in late October by the Gay Uganda blog and the Sexual Minorities Uganda group, in response to a proposal for new draconian anti-gay law. What's so terrible about this bill? The answer comes from the BoxTurtleBulletin blog, which has performed an excellent job of following homo-hatred in the African nation:

The Ugandan legislature is considering a bill that would enhance sentencing for gay people to include the death penalty for “repeat offenders”, among other “aggravated homosexuality” offenses, and life imprisonment for others.

Much outrage has been expressed by international human rights organizations, but little has happened in the streets over the Ugandan situation. The call to action was for the second weekend in November, and as far as I have been able to determine, a single action took place, in London on November 7, at the Uganda House, a governmental welcome center.

This report comes from Dennis Hambridge, an organizer with Gay Activists Alliance International:

The protest was joined by gay Ugandan John Bosco Nyombi who was illegally and forcibly put on an air flight back to Uganda by the UK Border Agency while seeking asylum in the UK, causing British courts to order his return back to the UK.

Amongst the banners and placards that were fixed to the front of the building, were banners stating “Unconditional Love for Ugandan LGBT” and the words of Dr Martin Luther King ("An Injustice Anywhere Is a Fight for Justice Everywhere” and pledging support for the Ugandan lesbian, gay, bisexual, transgender, queer and other gender variant people.

Hundreds of leaflets asking for the “witch hunt” of gays in Uganda to be ceased were handed out to passersby, not just to Brits, but also to people from many countries visiting Trafalgar Square on Saturday. There were many people stopping and applauding the protesters, and taking pictures of the action, pledging their support and to highlight the injustice LGBT people face in Uganda to their own governments.

(At the megaphone is Davis Mac-Iyalla, a gay Nigerian man granted UK asylum earlier this year.)

Bravos to all who participated in the action and brought much-needed street visibility to gay Ugandans, and also put some pressure on a Ugandan government office.

Unfortunately, no effort was made by USA non-governmental organizations to stage similar peaceful actions at the Ugandan embassy in Washington or the country's mission to the United Nations in New York City.

Early last week, I emailed many paid international and domestic LGBT advocates from HRW, IGLHRC, HRC, NGLTF and Global Equality, including Scott Long, Carey Alan Johnson, Joe Solmonese, Rea Carey, Julie Dorf and Mark Bromley, asking if they had any plans to leave their suites for press conferences at the embassy or mission in their cities, and none of them replied, not did they stage a visibility action for the Ugandans.

I believe the NGO advocates should get out of their offices more often and organize press conferences and vigils at embassies and missions, because it will pressure foreign governments and carry other tangible benefits for our oppressed brothers and sisters around the globe who can't stage such actions. Yes, the NGOs have sent letters to Uganda's leaders, but more should be done by the NGO advocates. 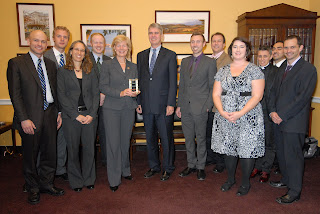 Recently, several of these advocates staged a photo-op with openly lesbian Rep. Tammy Baldwin in her office to bestow a leadership award on her for advocacy on many fronts, including at the international level. That is laudable, but how about these folks, including the good Congresswoman, getting out of their comfort zone inside Baldwin's office and pounding the pavement in front of the Uganda embassy in DC?
Posted by Unknown at 10:45 AM
Email ThisBlogThis!Share to TwitterShare to FacebookShare to Pinterest