FBI Has 3,000 Pages on Ted Kennedy
When a person dies, you can file a Freedom of Information Act request with the Federal Bureau of Investigation for any records on the deceased. My open government bone gets itchy many times when famous people pass away.

I experienced an episode of nosiness when homo-hating Sen. Jesse Helms died, I filed a FOIA, and the FBI soon revealed it had more than 1,000 pages on him. But more than a year after his demise, the feds still have not released a single page on the North Carolina politician.

The feds received another request from me in the summer when closeted gay singer Michael Jackson died, and in response the FBI said it had 600 pages on him, but didn't say when that file would be released.

And when the Lion of the Senate, Ted Kennedy passed away, the FBI got a FOIA request from me for his file. Last week I got a letter from the feds saying there were over 3,000 pages located responsive to my request. That's a lot of pages.

As with the Helms and Jackson requests, the FBI doesn't know when the Kennedy pages will be ready for public inspection. The agency is to be commended for quickly locating the number of pages on these men, but as with so many FOIA requests, actual release of the information can stretch on for years.

Here's an idea for President Obama to consider as part of a package to improve the nation's FOIA law: Find the money to hire more FOIA staff at all federal agencies. More staff would speed up the review and release of documents, giving us a better understanding of our government and our leaders.

Here's the letter from the FBI on the Kennedy file: 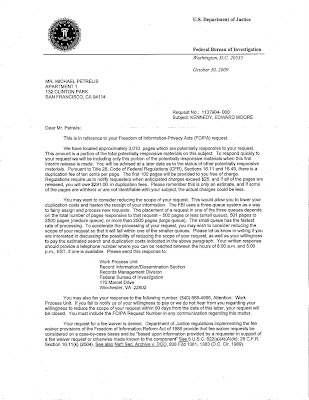 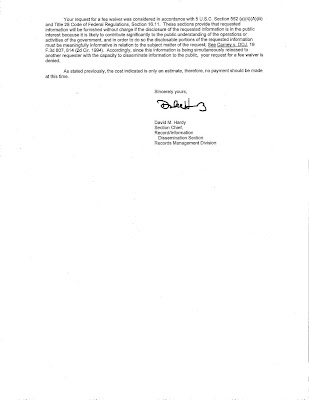 Posted by Unknown at 2:53 PM
Email ThisBlogThis!Share to TwitterShare to FacebookShare to Pinterest