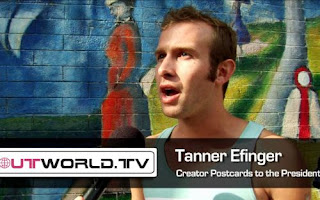 Cleve's EAA Leader:
Who's Pelosi? What's a Senator?
For months, Cleve Jones and backers of his march on Washington tried to persuade LGBT citizens to flock to DC and get inspired by the new post-Prop 8 younger generation of activists. I was one, for many reasons, who didn't heed the call to spend hundreds of dollars to be in the capital on October 11. Today, I learned there was another reason to criticize the leadership behind the march.

One of the key organizers, and an unpaid assistant to Cleve, Tanner Efinger, who has been named interim director of the collapsing Equality Across America org that sprang from the march, reveals his deep ignorance of one-year ago.

From the "Stonewall 2.0" article, written by Christopher Lisotta, in the current issue of The Nation,:

Before November 2008, Tanner Efinger was just another 24-year-old working at a bar in the city of West Hollywood, the lesbian, gay, bisexual and transgender (LGBT) center of Los Angeles. "I was really not a political person, even a little bit," he says. "I didn't even know who Nancy Pelosi was and didn't really understand what a senator was."

But that all changed after the election of Barack Obama and the passage of Proposition 8, the voter referendum that banned same-sex marriage in California. [...] (Emphasis added.)

Well, it is good to know Efinger now has a clue about Pelosi and some understanding of what U.S. Senators do, but it ain't enough to get me to think he and Equality Across America are now about to create a national network of 435 Congressional district captains, ready to pressure lawmakers.

Efinger seems to be the perfect poster child for the Naive Equality Princesses sprouting up since November 2008. These NEPs think it's enough to use Twitter, scream in the streets for equality, have lots of Facebook friends, and clap their hands for change.

But when they are questioned about the basics of our federal government, you know, little things like who the Speaker of the House is and the role senators play in the political process, the NEPs are shockingly ignorant. Then they wonder why veteran activists don't sign up for their marches or give them much credence as effective youth leaders.

If the Stonewall 2.0 generation wants to truly create lasting changes for the LGBT community, could they first learn the basics about who leads Congress and what members do? If gay youth like Efinger want to organize teams to lobby national politicians, it would be best for them to get a clue, a few clues actually, before they set up those teams.
Posted by Unknown at 11:40 AM
Email ThisBlogThis!Share to TwitterShare to FacebookShare to Pinterest

I was stopped by a petitioner for Marriage Equality at Milk Plaza yesterday. I asked him what Marriage had to do with Equality. I said I fail to see how this is about equality. It is about becoming part of an exclusionary group which is afforded special rights not available to everyone else. As a gay man with two partners do I get included? Do my single friends who chose not to partner who who fail to find partners get included? Shouldn't true Equality bring everyone to the table?
He said he didn't want to talk about it.

Why oh why can't we critically discuss these things? Are we all just uniformed drones?

I have immense respect for Cleve Jones' Quilt Project, but his "activism" and -- as pronounced by Rachel Maddow -- "leader" of the gay community, I'd like to know who appoints these people our leaders. Is every widow of Harvey Milk de facto a leader?

Who appointed the EQCA crew? And if they are leaders, I am no follower.

It's sort of like the "black spokesperson," for example, Al Sharpton, who, as far as I know, no black man or woman I know thinks he speaks for them. Apparently, like black pastors, if one becomes a "paid activist" -- rather than advocate -- that makes one into a leader?

My acquaintance with thousands of gay men does not make me an expert on what our immensely diverse populations think about any issue. Nor does it make me a "leader." And since no one consulted me on the appointments of Cleve Jones or the EQCA crew, I think it's time to remind all of us, we speak only for ourselves, not for each other. The hubris of self-appointed gurus has infected many minority populations, AS IF, all minority members are monolithic X. My experience is quite opposite and contrary to such monolithic stereotypes, and I find their appellation as "leaders" offensive.

Did you appoint them, or vote for them, or sponsor them? Nor did I.

Gee. I wonder how Efinger got the job? I'm going to lie awake nights trying to crack the mystery.