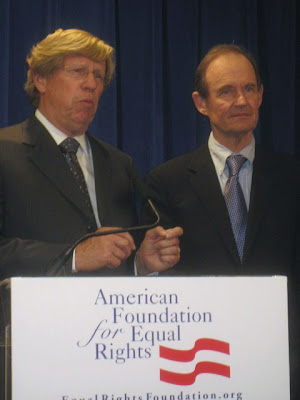 (Ted Olson and David Boies meet the press after a recent court session over their Prop 8 challenge.)
The good people at the American Foundation for Equal Rights, who are behind the federal challenge to California's Prop 8 passage last year, have shared with me transcripts from two recent hearings before Judge Vaughn Walker in San Francisco.

Back in July, I made an effort to secure the transcripts of such hearings, even though I was sitting through some of them, because I believed the gay community, and lots of other interested parties, would be keen to follow the case through the written word. The foundation readily agreed with me and provided me with the July 2 transcript.

So far, the proceedings have not been aired on TV, but that could change. According to UniteTheFight, Walker is considering allowing cameras into the court room, which is something I believe we all should support.

But thanks to Chad Griffin and Yusef Robb of the American Foundation for Equal Rights, anyone with a computer can follow the case thus far through the transcripts.

Click here for a PDF of the August 19 hearing, which is 70-pages.

To read the 103-pages from the October 14 proceeding as a PDF, click here.

Many big thanks to the foundation for making the transcripts available and giving America a great glimpse into this important case. Oh, and much gratitude for filing the lawsuit. May we prevail on this matter, and put an end to the hatred and tyranny of the state ballot measures on gay marriage.
Posted by Unknown at 1:45 PM
Email ThisBlogThis!Share to TwitterShare to FacebookShare to Pinterest

I echo the big thanks to AFER for their hard work, dedication, transparency and accessibility!

and thank you, phil, for catching that story about walker considering allowing cameras into his court room. we all would benefit if the hearings were broadcast.