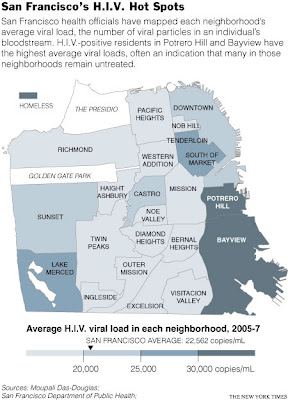 NYT: SF Maps HIV
Viral Load by Neighborhood
The Bay Area section of today's New York Times has a fascinating article by Carol Pogash about the local health department using HIV viral load mapping to ask some important new questions about using new technology to better help people with AIDS and the larger communities in which we live. Full disclosure: I'm quoted, but that is not the only reason why I say the piece is fascinating.
Posted by Unknown at 1:57 PM
Email ThisBlogThis!Share to TwitterShare to FacebookShare to Pinterest