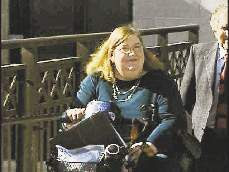 There were a few significant developments last week in this case, and the WHO-TV station in Iowa succinctly reported on them:

A former Aviva employee, accused of embezzling nearly $6 million dollars was granted pre-trial release Tuesday morning. Phyllis Stevens is charged with 18 counts of fraud, money laundering and identity theft. [...] Her spouse, Marla Stevens, who is a co-defendant in a civil lawsuit filed by Aviva, sat in the audience.

During the detention hearing, an FBI investigator laid out how Phyllis Stevens spent the money. Kevin Kohler says Stevens funneled more than $2 million through an American Express Account. Another $950,000 went to the IRS. [...]

Judge Ross Walters called the case, "peculiar." He agreed to release Phyllis Stevens on certain stipulations, including posting $75,000 in cash, which Stevens will forfeit should she fail to appear in court. Phyllis Stevens also agreed to electronic and GPS tracking. [...]

Federal agents arrested Phyllis Stevens at the Bellagio in Las Vegas on September 25th. That was two days after Aviva executives fired Stevens, the compensation specialist for the company. According to testimony, Marla Stevens had been living at the Bellagio, an exclusive hotel and casino, since early this year.

Prosecuting attorneys argued Phyllis Stevens is a flight risk. They pointed to statements indicating Phyllis and Marla Stevens planned to travel to Greece and then take up residence in Germany. [...]

Following the hearing, Phyllis and Marla Stevens parted with a mutual, "I love you."

As if all that weren't enough to pique one's interest, there's also an aspect to the case, being pushed by Marla, that could benefit the effort to overturn DOMA. From a Des Moines Register article last week:

Marla Stevens is asserting that she cannot be required to give a deposition in a lawsuit filed by her partner's former employer, Aviva USA, partially because Iowa law says "neither husband nor wife" can be questioned in a legal proceeding about any communication that took place between them. [...]

In asserting her spousal privilege, Marla Stevens, who with her partner has been an outspoken advocates for same-sex marriage, also could be setting up a challenge to the Defense of Marriage Act. [...]

Maura Strassburg, a Drake law professor who specializes in sexuality law, said Marla Stevens' assertion speeds along "how the Defense of Marriage Act is to be applied in those states that have legalized same-sex marriage. You have a conflict in the laws and how they are to be applied. It will be interesting to see how it develops."

Also weighing in on this avenue of legal defense, the Register reported, is Lambda Legal:

Camilla Taylor, senior staff lawyer for Lambda Legal's Midwest office, and Moulton said Marla Stevens would have an uphill struggle in convincing a judge she has spousal privilege in a federal case.

"Regardless of how people feel about the allegations in this case, married same-sex couples should be treated as married under federal law," Taylor said.

"However, it would be challenging for a member of a same-sex couple to rely on a spousal privilege in federal court, given that a prosecutor is likely to argue that the so-called Defense of Marriage Act precludes such reliance."

Wouldn't it be the height of irony if one good thing to come of this legal mess would be a chipping away at DOMA?
Posted by Unknown at 1:42 PM
Email ThisBlogThis!Share to TwitterShare to FacebookShare to Pinterest