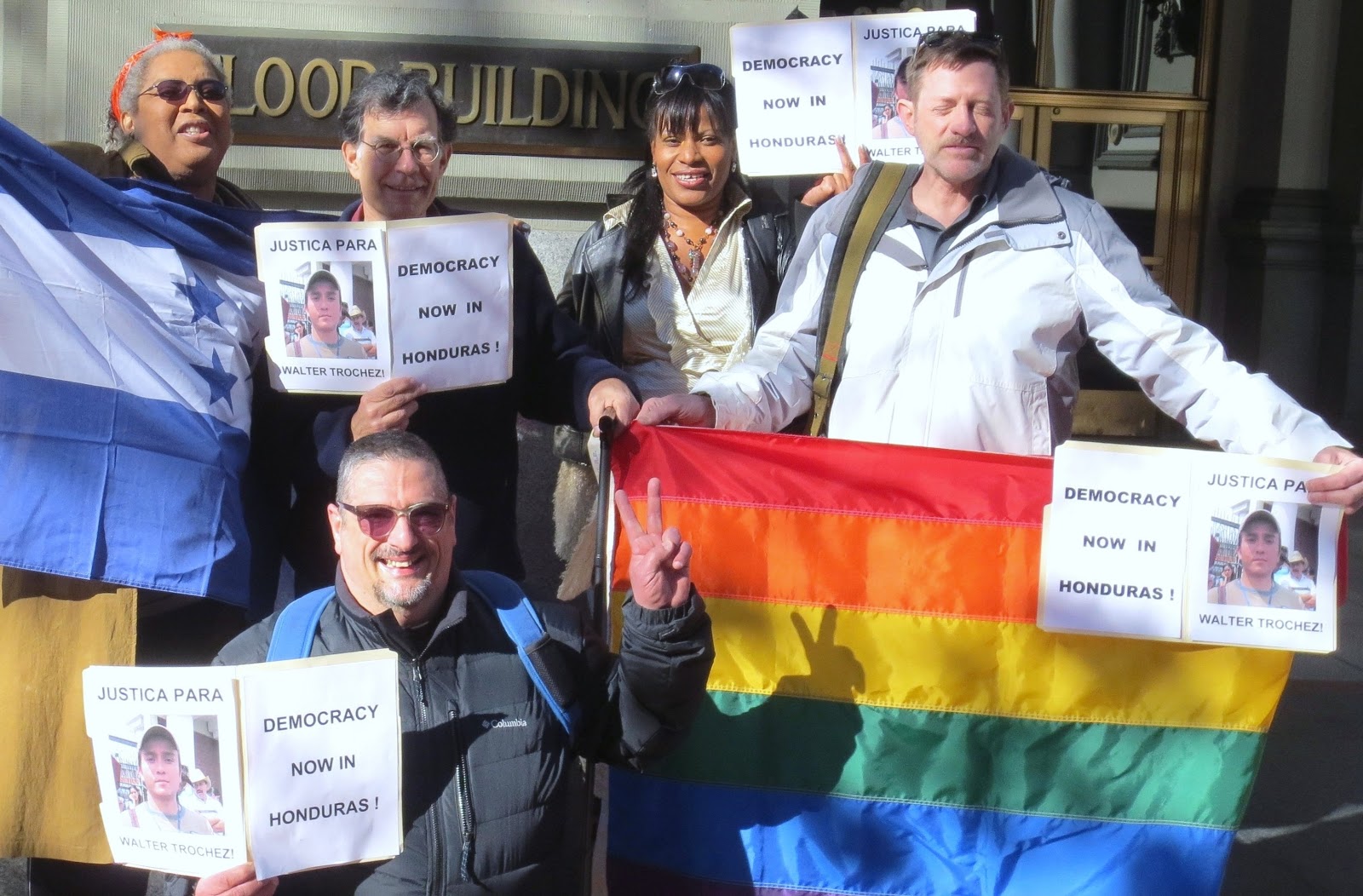 The Gays Without Borders one-hour vigil yesterday, December 13, at the Honduran consulate in San Francisco was attended by a handful of dedicated human rights activists. We staged the vigil to demand a full and impartial investigation into the assassination of gay man and democracy fighter Walter Trochez, who was killed by right-wing militia forces on December 13, 2009. 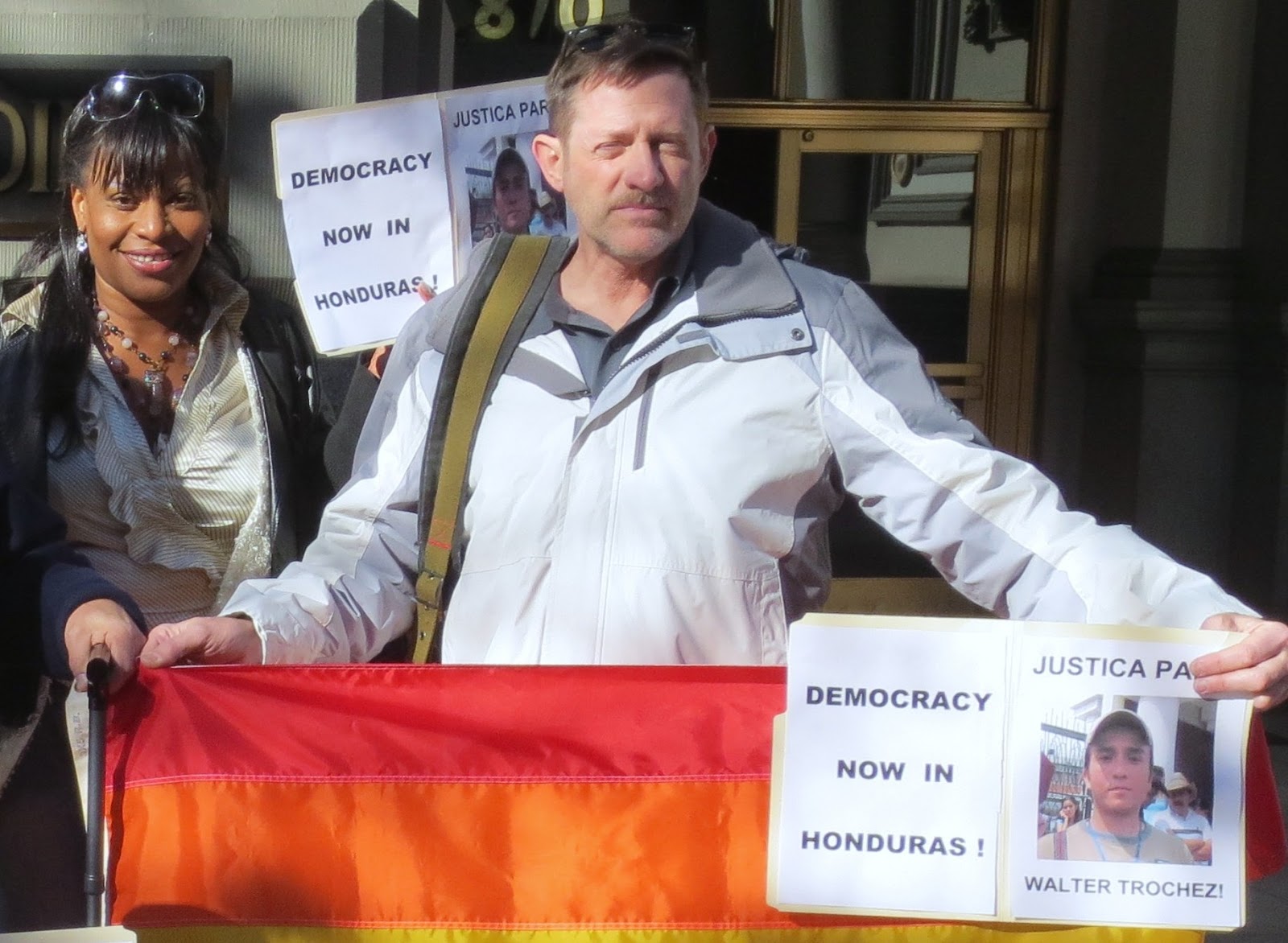 Among the participants were Ckiara Rose, left, a straight woman born in Guatemala who made comments in Spanish expressing solidarity with the LGBTI community in Honduras. Longtime global AIDS activist Gary Virginia, right, said that as a gay man he supports the Honduran peasants and labor leaders who are targeted by death squads for organizing resistance to the junta that seized control of the country in a June 28, 2009, coup. 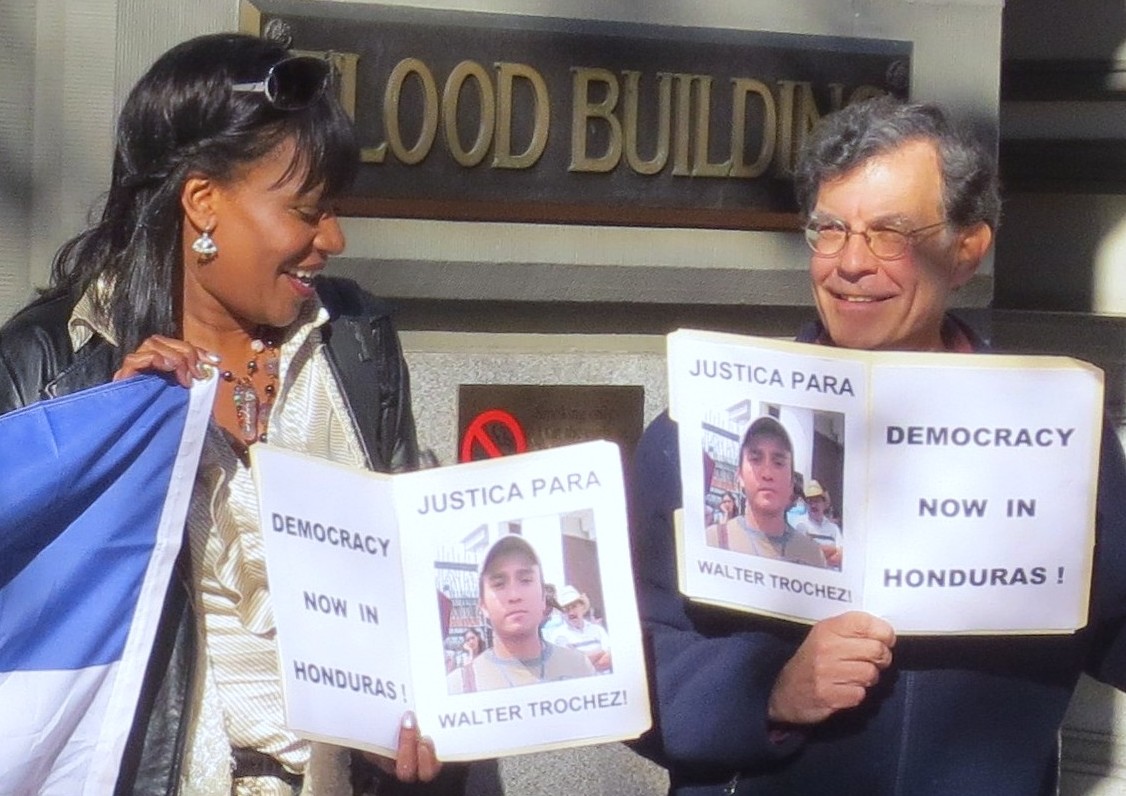 Michael Bass, right, who is straight, joined the vigil to represent the School of the Americas Watch's chapters in San Francisco and the East Bay. He demanded that U.S. military aid and support immediately end for the the anti-democratic government now in power in Honduras. Respect from the American government for the human rights of all Hondurans fighting to restore democracy was also a concern of Michael Bass and his organization. 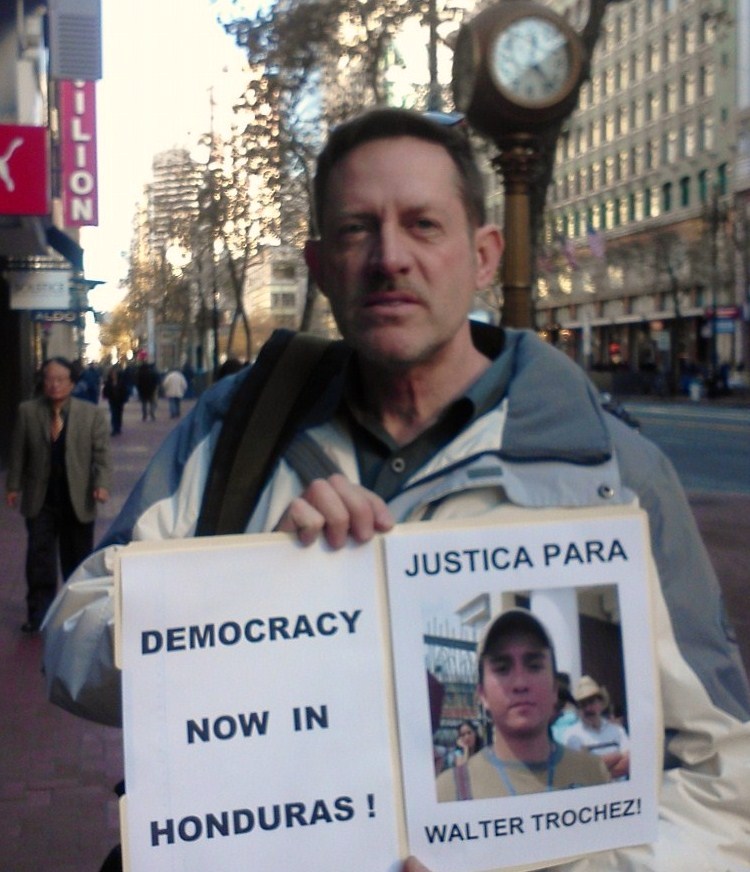 Gary Virginia displaying a poster demanding "Democracy Now in Honduras!" and "Justica for Walter Trochez!" There's been no investigation into Trochez's assassination and no one charged with his killing. 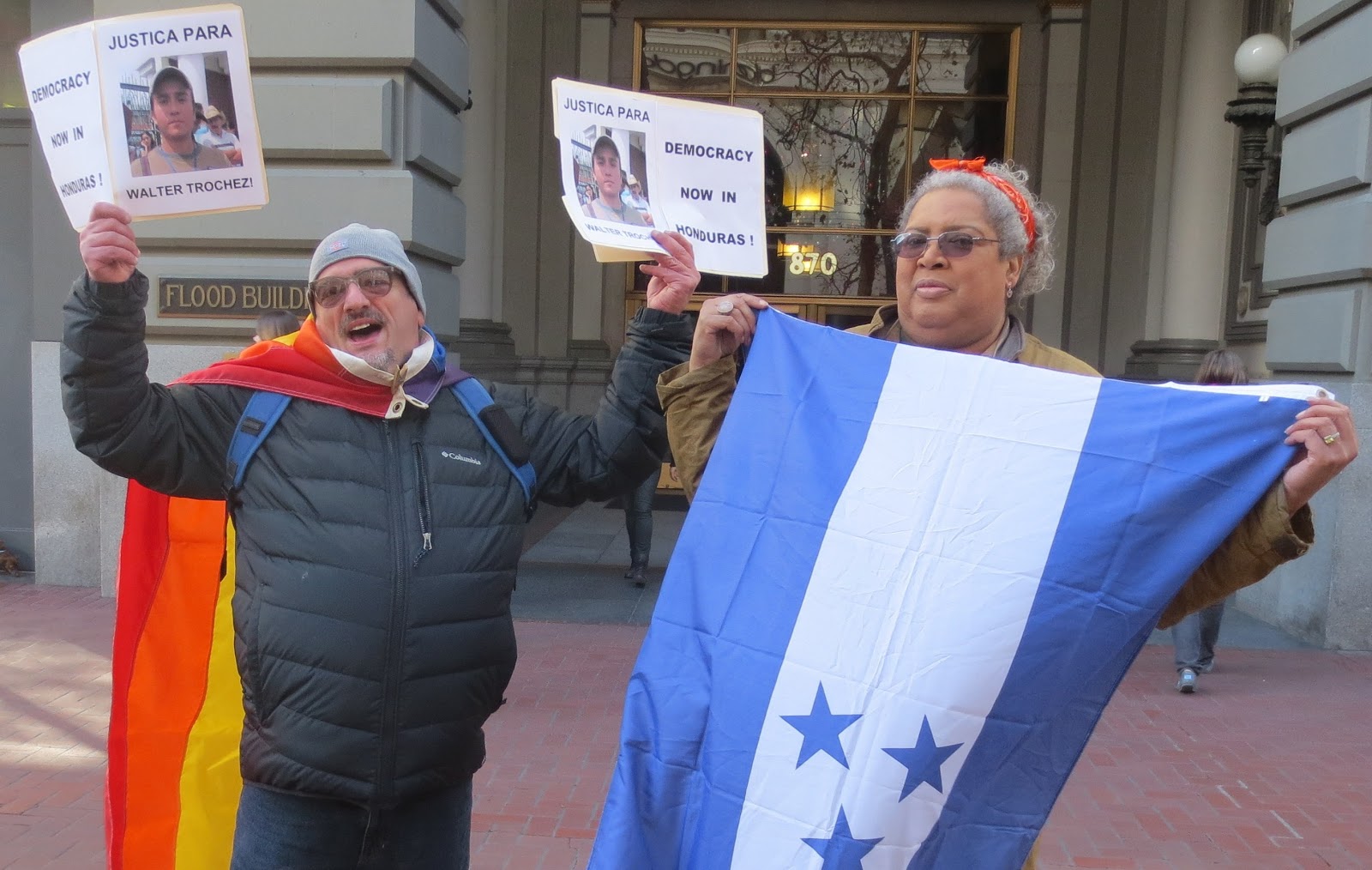 Holding the Honduran flag is Veronika Fimbres, and yours truly waving our posters featuring the visage of Walter Trochez. She spoke as a veteran transgender leader and deplored the torture and murder of dozens of transgender and intersex individuals in Honduras since the coup.


Veronika was cruising for a new husband at one point, and she recruited this furry fella join with us for a short while. I didn't catch his name but he thanked us for organizing the action and fighting for justice for Walter Trochez. 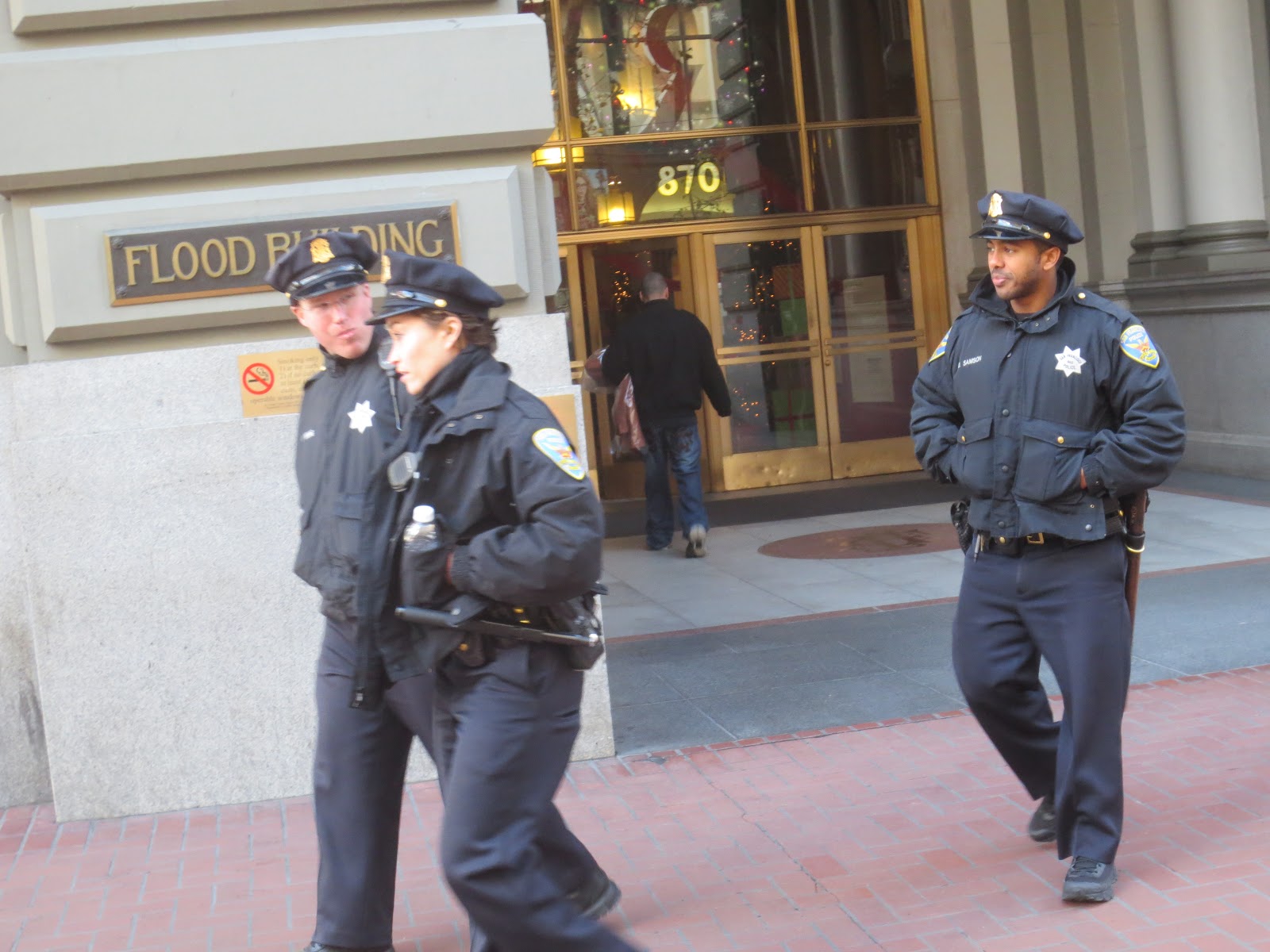 A few San Francisco police officers leaving the Flood Building, which houses the Honduran and various other consulates, after speaking with the Honduran consular staff about our plans. We stayed outside on public property and didn't enter the building and try to speak with staff. However, through phone calls and emails to the consulate, we made them aware of our vigil.


Here's a terrific short video of our diverse crew of activists assembling for the vigil. Many thanks and big hugs to everyone who came out yesterday and made the action a success.

Posted by Unknown at 2:46 PM
Email ThisBlogThis!Share to TwitterShare to FacebookShare to Pinterest