Is There an FBI File on 'Punch' Sulzberger? 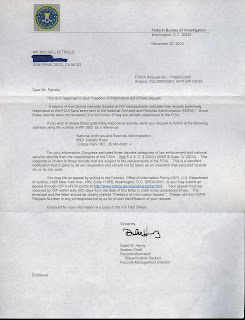 My Freedom of Information Act request to the Federal Bureau of Investigation for a copy of any records on the late New York Times publisher Arthur Ochs "Punch" Sulzberger brought forth the letter above this week, which states in part:

I've sent a letter to NARA officials asking them to provide me with copies of those records that may pertain to Sulzberger. Hopefully, there will be as quick a responsive with those files as with my request to NARA for the records on radical leftist journalist Alexander Cockburn.
Posted by Unknown at 11:12 PM
Email ThisBlogThis!Share to TwitterShare to FacebookShare to Pinterest