My friend Jamie Kirchick, the gay conservative writer, has been over in Belgrade covering Sunday's gay pride march for Radio Free Europe and Foreign Policy, and events related to the march. He wrote this after the weekend's clashes:


Though the Serbian government won plaudits from Western embassies for its cooperation with the gay-rights march -- the U.S. ambassador to Serbia, Mary Burce Warlick, who attended a pre-march rally, told RFE/RL that the United States “is very pleased with the government’s strong support in terms of security measures for the event” -- the intensity of the violence demonstrated the power of the ultranationalist right to cause instability. 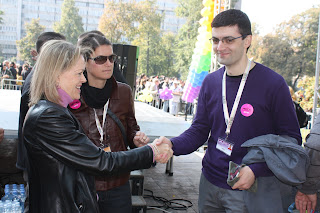 Jamie snapped this photo of Ambassador Warlick shaking hands with Lazar Pavlovic, one of the brave young organizers of Belgrade's pride events.

And in this video, he interviewed her and I'm so pleased she articulates the full support of the U.S. government behind the gay marchers:

Kudos to Jamie for getting our ambassador to state our government's backing of gay rights in Serbia. By the way, he was socked by homophobic counter-demonstrator but was not harmed.

And I also extend lots of thanks to Ambassador Warlick for attending the rally and speaking for Serbia's gay people.

Finally, congratulations to Lazar, his fellow pride march and rally organizers, and all the courageous people who participated in the gay events on Sunday. Those events are just the start of gay Serbia's walk together toward tolerance and respect for the human rights of all of the country's citizens.
Posted by Unknown at 4:37 PM
Email ThisBlogThis!Share to TwitterShare to FacebookShare to Pinterest