HRC's Marty Rouse Lobbies a Door?
You really have to wonder sometimes about the six-figures folks running the Human Rights Campaign and if they will ever get a clue. The org's national field director, Marty Rouse, wrote a blog post yesterday about his campaigning for Democratic New York State Senator Brian Foley, of Long Island. Rouse wrote:


While over $1 million will ultimately end up being spent in this top-tier race, it is the face-to-face contact with voters in the final days leading up to Election Day that have the best chance of winning over the remaining undecided voters.

There is nothing more empowering in our democracy than talking face-to-face with voters in a tight race.

With such an emphasis on getting up close to an actual voter, you would expect HRC to use a photo of Rouse engaging face-to-face with a person, right? Clearly show him and the voter, too. Yeah, well guess again.

Check out this photo, which when you save it, the HRC file name for it appears in the pop-up window as "Marty-door-300," and see the org's face-to-face operation for Foley: 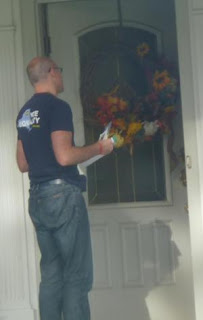 Even with a 17% drop in revenue this year, can't HRC afford to hire an assistant who knows how to take a simple and effective photo, showcasing the $184,600 national organizer, speaking to a voter?

I'm not sure how the HRC blog editors let this picture get up, when it's fuzzy, doesn't contain Rouse's face, and shows him addressing a door with a seasonal wreath on it, and not a single voter in the image.

From small stuff like this, to the larger problem of HRC is beholden to the Democratic Party at the expense of the gay community, the org deserves every woe and critical attack on its leaders and their incompetence.

Curios that Rouse's post said not a peep about HRC's special adviser Brian Ellner, who was hired in the summer to head up the org's New York State affiliate the Campaign for NY Marriage. We'll learn in little more than a week if Ellner's strategy pays off for Democrats running the show in Albany.
Posted by Unknown at 10:22 PM
Email ThisBlogThis!Share to TwitterShare to FacebookShare to Pinterest

My mom, who lives in this state senate District, was the volunteer photographer. I'm sure she'll get a kick in knowing that you were interested in her photography skills.

i photo of you and your mom would have conveyed a lot more meaning than you talking to a door. also, lemme know when HRC accomplishes some real changes at the federal level. i've been waiting 30 long years for HRC to be effective for gays. now would be a good time for you all to bark at the DEMS and break free of their hold on your agenda.