How HRC is Profiting Off Bullying Deaths
Always on the prowl for ways to dupe naive gays into parting with their money, in the ludicrous belief that doing so abets solving any of the problems facing gay people, the Human Rights Campaign is offering a plastic bracelet for $3, ostensibly to do something about bullying and gay kids committing suicide. 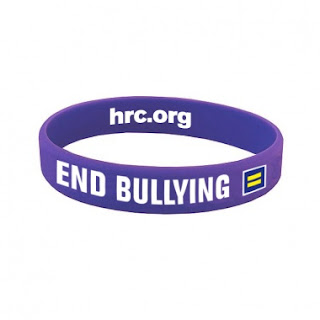 Too many young lives have been lost because of anti-gay bullying. LGBT youth need to know they're not alone, and that things do get better. Wear HRC’s purple End Bullying Wristband purple to remember those we've lost and show your support for a world where diversity is embraced, not ridiculed.

100% OF YOUR PURCHASE of the HRC End Bullying Wristband goes to HRC's fight for lesbian, gay, bisexual and transgender equality.

Yep, you can waste a few bucks supporting healthy six-figure salaries at this Democratic org, because buying this piece of plastic isn't going to do a damn worthy thing to help at-risk gay and questioning teens.
Posted by Unknown at 12:30 PM
Email ThisBlogThis!Share to TwitterShare to FacebookShare to Pinterest

WOW that is just so LOW, Disgusting and Ghoulish

I don't think this is so horrible. If people wear them and it creates a conversation with people about anti-gay bullying, that's a GOOD thing, right?

Three dollars is half the cost of a beer or a cocktail. This is a better use of 3 bucks. Think about how much money our community spends on alcohol every day!

Maybe the HRC logo on the bracelet isn't necessary, but noprofit groups have been doign similar things for years. Are we upset with Lance Armstrong for his foundation's PROFITING on testicular cancer awareness?

Hmmm, its just that HRC wants to be a "one stop shop" for gay rights - rather than build across coalitions of the numerous LGBT groups that have specific issues/focus - HRC seems to want all the attention (and the $$ too)....

HRC is a whore. She stands on the corner looking for tricks. This is just the latest trick. They have done almost nothing to REALLY move ahead gay rights and protections.

I think you are forgetting that many people, especially the kids, enjoy and want to make statements with their clothing, piercings, posters and, yes bracelets. Most of those bracelets (I have a 15yo boy) cost considerably more than $3. Maybe you should lighten up?

i am 51-years-old and have waited 3 long decades for the HRC to deliver on its promise. the issue is not a matter of me lightening up. instead, the issue is HRC finally achieving lasting change at the federal level. enough with their scams and gimmicks to raise money to pay themselves good salaries. get a clue as to why so many are so fed up with HRC.