Gays From 23 Nations Sign
Solidarity Letter for Serbian Pride March
[Update: New names at very bottom. We now have one more continent, two more trans groups, three new countries added to the letter. From Africa, Asian, Australia, the Caribbean, Europe, the Middle East, North America, and South America, the message is clear: Protect the safety of pride marchers in Belgrade. Thanks to all who have made this solidarity possible.]

This coming Sunday brave gay Serbians and their allies will hold a march, in the face of extremist homo-hate, but with the police committed to protecting the safety of the pride participants. Our friends will face many bullies in Belgrade, but they will not stand alone, for we stand with them, as they make themselves more visible, loud and proud! 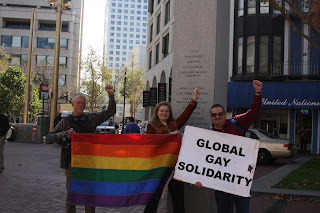 (Left to right: Ken, Molly and me. Credit: Bill Wilson.)
Today in San Francisco's United Nations Plaza, which honors the birth of the UN here, longtime activists Ken Hodnet, Molly McKay, Bill Wilson and yours truly, stood near the pillar marking the year Serbia was admitted into the UN, to read the solidarity letter and list of endorsers. Ken shot the video.

We plead with you to help launch of week of actions all over the world on behalf of the gay Serb, and to share the letter and list of endorsers, and our images on your web sites, blogs, listservs and with lots of your friends.

Many thanks to the 43 activists and politicians from 20 countries who endorse this letter of solidarity. This letter will be hand-delivered to the Serbian Mission to the UN at a press conference on October 8 at noon, located at 5th Avenue and E. 67th Street. Please join us.


We openly lesbian, gay, bisexual and transgender (LGBT) leaders and elected officials from around the world are writing to express our deep solidarity with our brothers and sisters in Belgrade, Serbia, as they march in their October 10, 2010, Gay Pride Parade.
We call upon all Serbian political leaders and police forces to do all in their power to protect the human rights of the marchers to assemble peaceably and march as LGBT people as our supporters do throughout much of the world. We also call upon Serbian politicians, as ones responsible for building a democratic society, to send a message of tolerance, publicly support the Gay Pride Parade and join the march.
The October 10 parade will be the first Belgrade gay rights march since 2001 when anti-gay extremists attacked the participants and forced the event's cancellation. An attempt was made for a parade in 2009, but it was called off hours before it began because bodily harm was threatened against the participants.
The Serbian government must put itself on the side of those who peaceably assemble and not give in to those who would deny the marchers their human rights.
We applaud Serbian Minister of Interior Ivica Dacic for his public commitment to protect the safety of the gay marchers on October 10. We expect Minister Dacic to thwart any attempt to stop the march from proceeding to its conclusion.
Our eyes and the eyes of human rights defenders around the globe will be watching Belgrade on October 10, as we witness LGBT Serbians and their supporters peacefully exercising their human right to be visible in the streets, free from violence and fear.
Endorsed by:

It's not directly related to this campaign for solidarity with Serbian gays, Michael, but you might enjoy a post I put up on my blog about an early (1984) international gay solidarity effort.

We certainly fully support this effort.