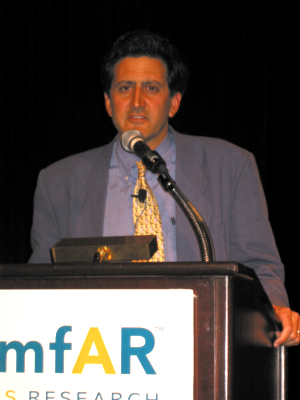 Among the more nutty ideas proposed by San Francisco's STD control chief Dr. Jeffrey Klausner was a proposal in 2002 to force the maker of Viagra to add a stronger warning on the drug's warning label about a possible link between HIV and other STDs and use of the erectile dysfunction medication. Citing his own study of people seeking HIV/STD testing at his own city-run STD clinic, Klausner, as is his media-whoring custom, generated lots of news, including a story in the Los Angeles Times, in March 2002:

[Dr. Klausner is] making an unusual appeal to federal regulators to warn consumers that use of the sexual impotence drug Viagra is linked to gonorrhea transmission.
"The data's clear, the evidence is strong," said Dr. Jeffrey Klausner, director of sexually transmitted disease control for the city, who has conducted a study on the issue. "There's really at this point no excuse for inaction by the FDA or the manufacturer."

But Food and Drug Administration spokeswoman Laura Bradbard said Thursday that her agency wants to wait for more studies before deciding if changes to Viagra's warning label are necessary. Klausner is not suggesting that Viagra causes gonorrhea. Rather, he contends that Viagra leads to risky sexual behavior, which is associated with higher rates of STD transmission. [...]

He said young gay and bisexual men often use Viagra recreationally, along with ecstasy and other illegal drugs, lessening their resolve to use condoms. In fact, Viagra's manufacturer, Pfizer Inc., has warned doctors about the danger of mixing amyl nitrate (a street drug known as "poppers") with Viagra, which can cause a sharp drop in blood pressure. [...]

[Pfizer spokesman] Cook said the company is satisfied that Viagra's consumer label adequately addresses the issue of STD transmission. It reads: "Viagra does not protect you or your partner from getting sexually transmitted diseases, including HIV--the virus that causes AIDS." [...]

A few points need to be made here. First, some Klausner critics scoffed at his study because it only looked at just one population -- clients at his STD clinic. Critics said he designed the study to support his hypothesis of a link between HIV/STD transmission and Viagra, with a population very likely to show at least a casual connection of infections and the ED drug. Kind of like studying people at cocktail bars and finding some of them have liver conditions.

Second, Viagra's warning label, which, like all such labels, is about 24 -28 inches long, double-sided and printed in 8 point type, already included an explicit messages about the drug and HIV.

Third, many men, in the throes of lust and love, do not stop and take an hour or so to read such labels in their entirety.

Why was Klausner going all-out in his crusade? Was it just to cast himself in the media limelight, again, as the lone, brave STD control chief doing everything in his power to prevent new infections? I can't answer those questions, and Klausner never addressed the issue of how many men were likely to all of sudden read a newer warning label, when they didn't previously, and that the warning would aid in halting new STDs.

A few months later, in July 2002, Klausner published his study and results Journal of AIDS. These were some of the highlights:

Despite these limitations, our data highlight a significant relationship between Viagra use and sexual risk behaviors, drug use, and new STD among a sample of gay or bisexual men in San Francisco. These findings are consistent with other studies of STD, HIV, and drug-related risk behaviors among gay men using Viagra [2,4], and provide compelling information on the potential role that Viagra may play in the transmission of new HIV infections and STD among gay or bisexual men in San Francisco [5]. [...]

Getting nowhere with his study and alarmist claims, in terms of persuading Pfizer to change its warning label more to his satisfaction, Klausner in July 2004 sent an eleven-page petition to the FDA, asking the federal government to force Pfizer to do what he wanted. He also demanded Viagra be reclassified as a Schedule III controlled substance, and under such a classification, anyone caught with the drug without a prescription, could be charged by prosecutors and be given up to five years in jail and slapped with a fine of $250,000. Click here to read Klausner's lengthy submission.

Then in November 2005, Matthew S. Bajko of the Bay Area Reporter wrote an excellent story about a serious setback in Klausner's campaign:

Fifteen months after requesting federal officials increase the penalties for illegal use of erectile dysfunction drugs, a San Francisco health official is changing course and withdrawing his controversial proposal. But he still is sounding alarms about how the drugs are marketed and labeled because of the role they play in the transmission of HIV and other sexually transmitted diseases. [...]

The move met with fierce opposition from the companies as well as gay health advocates and other medical professionals, who argued changing the classification would make it harder for those who legitimately needed the drugs to obtain them. San Francisco AIDS czar Jeff Sheehy went even further, calling Klausner's petition "AIDSphobic and homophobic," and in August of this year asked the city's Human Rights Commission to investigate the matter.

At a national conference in September to discuss the health concerns surrounding PDE-5 inhibitors, the class of drugs to which erectile dysfunction medications belong, Klausner's proposal once again met with opposition. One cardiologist warned if the FDA placed the drugs under Schedule III it would only increase the black market sale of the medications. Others argued that the move was unneeded because the drugs are already illegal to use without a prescription. [...]

However, Klausner said he has no regrets about filing the petition because data continues to show a connection between new HIV infections and use of Viagra.

And just to show what a "public health nanny" he really is, with national concerns, whether anyone wants him to serves in that role or not, the BAR noted Klausner had other kvetches to make about Viagra:

Klausner also continues to criticize how the makers of the drugs market their products, especially television commercials and the use of professional athletes as spokespeople for the drugs, such as the Viagra-sponsored NASCAR team.

So in November 2005 Nanny Klausner is still claiming data continues to show demonstrated a connected between HIV transmissions and Viagra, and the entire matter fades into the background, seemingly over, right? No, this issue still had another act to play out.

Earlier this week, findings from a National Institutes of Health-sponsored conference, with many analyses, medical journal citations and sexual health surveys and studies, found no link between HIV transmissions and use of Viagra. From the news release put out by Blackwell Publishing Ltd., publisher of the Journal of Sexual Medicine:

A comprehensive, multi-disciplinary conference funded by the National Institutes of Health sought to determine whether the drug class of PDE-5 inhibitors was contributing to an overall increase in HIV infection. The results of this conference appear in the latest issue of The Journal of Sexual Medicine. [Click here for the full article.]

Convincing evidence was not found to support the conclusion that PDE-5 inhibitor use is a risk factor for HIV infection. For the large majority of men, PDE-5 inhibitor use is conducted in a stable, committed partner relationship. Under such circumstances, the risk of HIV infection is relatively small. Clinicians and educators did emphasize, however, the importance of safe sex practices for those engaging in risky sexual relations. [...]

Irwin Goldstein, Editor-in-Chief of The Journal of Sexual Medicine , noted that this paper is especially important to the field. "Health care providers should be reminded that individuals infected with HIV frequently have ED from their disease or from pharmacologic agents commonly used in its treatment. Positive clinical benefits have been reported in the HIV population when using PDE-5 inhibitor drugs as indicated."

Well, don't tell Klausner there's a reported positive effect for HIV positive men, if they use ED drugs! It might alter his sex panic ways of thinking. And don't expect him to offer any apology for his years-long crusade, in which he needlessly and shamelessly demonized gay men in general and gay men living with HIV/AIDS. He's an unelected STD nanny who rarely acknowledges a mistake and continues in his busybody role at San Francisco health department.