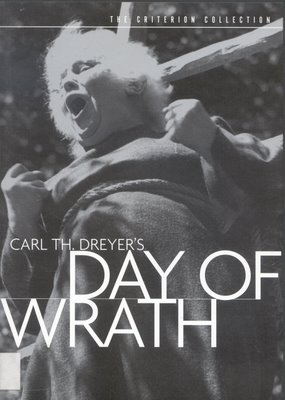 Seems very appropriate, given Tuesday's election and the results, that "Day of Wrath" is screening this weekend.

I've never had the opportunity to see this classic film as it was meant to be seen, projected up on a silver screen, so going to the Pacific Film Archive over in Berkeley tomorrow is going to be a long-awaited treat for me.

The Criterion Collection DVD of it is remarkable in its beautiful transfer from film to disc, but I'm quite old-fashioned with indulging in cinematic pleasures. That means watching masterpieces in a dark theatre with a great sound system, all cell phones and electronic devices turned off, and other cineastes worshipping at the celluloid alter.

Here is the listing from the PFA calendar:

“It has been said that Carl Dreyer's art begins to unfold just at the point where most other directors give up. Witchcraft and martyrdom are his themes—but his witches do not ride broomsticks; they ride the erotic fears of their persecutors. . . . In 1623 the young second wife of an austere pastor desires his death because of her love for his son; when the pastor falls dead, she is tried as a witch. As the girl is trapped, and as all possibility of hope is stripped away, one's identification with her fear becomes unbearable; then Dreyer dissolves our terror as we see that the individual is now laid bare, purified beyond even fear. It is a world that suggests a dreadful fusion of Hawthorne and Kafka: the young wife becomes what she and the others believe a witch to be. This psychological masterpiece . . . is one of the most completely moving films ever made.”