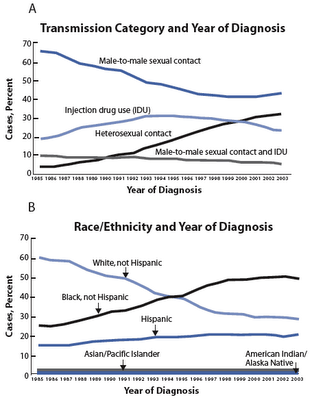 To be honest, I'm not sure what to make of the recent conference call transcript from the National Catholic AIDS Network, the fact that the US Deputy Surgeon General Dr. Kenneth Moritsugu and the CDC's openly gay chief for HIV prevention, Dr. Kevin Fenton, participated in the early part of the call before getting off and allowing the Catholics to debate amongst themselves over World AIDS Day activities, HIV prevention and testing, and the church's response to helping people with AIDS or at risk of contracting HIV.

Neither Moritsugu nor Fenton broached the subject of gay men and AIDS, even though gays comprise the largest transmission category of people with AIDS, on the November 1 call. (Link to the full transcript is at the end of this post.)

Moritsugu had this say though about the church:

Well, you know, I’d like to begin first by saying that we really need to applaud the Catholic Church for the really outstanding job that it does on a daily basis to help so many including those affected by HIV/AIDS.

And I'm also grateful that today everyone on the call is taking time to participate to learn from one another, to challenge yourselves on how you might augment your parish’s response to HIV/AIDS.

Would have been nice, not mention honest, of the openly gay Fenton to say something, ANYTHING, about his gay brothers grappling with HIV issues. He could have cited the CDC's own current HIV prevention brochure which highlights gay men thrice.

- Prevention efforts are aggressively targeting a wider range of communities than ever before, including gay men of color, African-American and Hispanic women, white gay men, injection-drug users, and adolescents as they come of age.

After Moritsugu and Fenton left the conference call, a concern tangentially related to gay men was raised and address by Catholic AIDS officials:

Sergio Farfan: Yes. My name is Sergio Farfan I’m from New Orleans, Louisiana Latino Health Coalition. I have three - what it was saying is the (unintelligible) is there’s a big stigma because a lot of the population (in this context) are thinking that HIV is a white gay man disease and we had to work hard to change that mentality on the people. Also I have a question that is talking about prevention. What is the Catholic Church’s stand regarding the use of condoms?

And so the church - and then the other part is that looking at the teaching on birth control, that the church teaches again that in marriage and in all sexual activity there needs to be an openness to life that the church does not support the use of condoms.

It should be pointed out that yes, gay white men have been heavily impacted by HIV/AIDS, but it is not a gay disease or a black or Hispanic or Asian or female disease, and that this information should be shared by the man from the New Orleans Latino group who raised the question. And I don't know what to suggest about the church's murderous policies on condoms and sex outside of marriage, which does not recognize gays can't get married, so of course we're having sex outside of that woeful institution.

Excerpted comments made by the federal health officials:

On behalf of the US Department of Health and Human Services, I’d like to welcome all of you to today’s important call. [...]

We’re committed to improving health literacy which means that we try to provide information in such a way that the people we serve will hear, will understand, and will embrace our messages and that they will be able to act on that information and make choices that will best protect and improve their health. [...]

Well, you know, I’d like to begin first by saying that we really need to applaud the Catholic Church for the really outstanding job that it does on a daily basis to help so many including those affected by HIV/AIDS.

And I'm also grateful that today everyone on the call is taking time to participate to learn from one another, to challenge yourselves on how you might augment your parish’s response to HIV/AIDS.

It really is an opportunity because from the faith-community standpoint, the faith community oftentimes sees individuals, perhaps once a week, compared to the number of times that people see their health provider, which might be perhaps once a month or even less frequently. [...]

First, I want you to think about what you as individuals can do, you as parishes can do to challenge other faith and service organizations to join in the battle against HIV/AIDS. Because the government can’t win this battle alone, the Catholic Church can’t win this battle alone, and yet every single one of us collectively can have a major impact on how HIV affects our communities. [...]

The second is that I want you to listen with intent on today’s call. Intent to learn and to put what you learn into action for those whom you serve and for the people with whom you worship.

The third request is that I hope you will share with all of us on the call your best practices. If you have an HIV prevention or testing, or treatment program in your parish that you feel is working, tell us about it.

You’re going to hear from your colleagues who will share their best practices with you later on in the call. I give your fellow travelers in the faith an opportunity to learn from you. [...]

And fourth, I’d like each of you to think about how HIV affects your own life and the lives of those you serve. Because we are most committed to the fight when we can feel empathy for the struggles that our families, that our friends, that our neighbors face.

And finally, I’d like to request that every Catholic parish in this country educates its parishioners about HIV and to encourage your members to get an HIV test. [...]

Help us to do this. Educate those in your parish about HIV. Encourage them to be tested even if they think they may not be at risk. And share with your colleagues
what you have learned on today’s call. We’re here to work together with you and I want to thank you in advance for what you all are doing to help improve the health of our nation.

And these were some of Dr. Fenton's remarks:

I may also say as I begin that I'm so delighted to have this opportunity to collaborate with and to work with colleagues in the Catholic Church and I am entirely looking forward to very good things arising from this collaboration and indeed collaborations in the future.

I am the Director of CDC’s National Center for HIV, STD, and TB prevention. And in that role, I oversee CDC’s prevention program that aim to reduce burden of HIV, other sexually transmitted diseases, and tuberculosis in the United States. There also plans to add prevention of viral hepatitis to our center’s mission. [...]

Yes, it is. And I really want to (unintelligible). It’s certainly is still a devastating problem in the Unites States. And the disease has been actually devastating for communities of color. African-Americans bear a greatly disproportionate burden of the HIV and AIDS epidemic in the United States. More than half of the new HIV diagnoses and 33 states in the US between 2001 and 2004 were among African-Americans, although Blacks represent just about 13-1/2% of the populations in these states. [...]

We believe that routine HIV testing will help to ensure that more people learn whether they’re infected with HIV, allowing them to benefit from earlier access treatment and to reduce the risk of infecting their partners. [...]

People diagnosed early in their infection lives longer and healthier life. And by making HIV testing a routine part of their care, we believe that stigma surrounding HIV testing will decrease. So if providers tests all their patients and no one is singled out and a negative test will not imply that you’re in high risk, just that you were tested. [...]

Kevin Fenton: Thank you very much for that question. There are a number of ways in which you would be able to get information on best practices or what I prefer to call promising practices, because that perhaps much more reflective of the states of evidence that we have available today.

One very good source is looking at Web sites such as the CDC’s HIV Web site which is on cdc.gov. And information on key prevention activities, best practices, and promising practices on prevention are available through that Web site.

(Janet): I would like to know at what age do you recommend that the youth be - that people be tested for HIV/AIDS? In my church which is predominantly African-American Catholic, we’re trying to get a program for our youth and I want to know if it would be appropriate when we address how we use the recommend testing for them?

Kevin Fenton: (Janet), thank you. That’s an excellent question and it’s one that we often get from parishioners and colleagues working with youths across the country. CDC has recently issued new recommendations on HIV-testing in healthcare settings. And we now recommend that all patients between the ages 13 to 64 years be tested for HIV. And the reason why we’re encouraging that age group is two reasons -- two fold.

Firstly, there’s an increasing data from behavioral surveys which suggest that a significant proportion of young people are sexually active at earlier ages.

Secondly, it is important that HIV testing and the process of HIV testing is socialized and seen as part of general and good healthcare among Americans and therefore getting into the habits of going in for your health checks, having an HIV test, talking about issues with your physician, can be part of a socialization process for young people.

And therefore encouraging HIV testing and awareness at that early age, we believe is a good thing.

You read this entire transcript at the National Catholic AIDS Network's web site. Click here.
Posted by Unknown at 12:54 PM
Email ThisBlogThis!Share to TwitterShare to FacebookShare to Pinterest