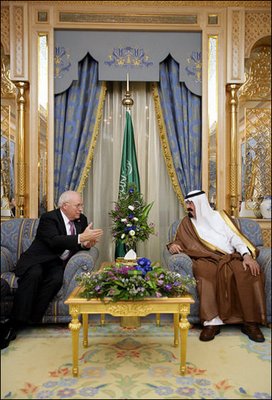 The last update on the White House's web page for the Vice President was more than a week ago, November 22,when Dick Cheney's office announced he would visit his pals in Saudi Arabia.

Since then, not a peep out of the Veep, at least in terms of any official statements from him, according to his web page.

So is Cheney still in the Middle East, back in the USA or traveling somewhere else in his official capacity as Veep? If Google and Yahoo news searches are any indication, no one knows where he is these days. Perhaps on another hunting trip?

Even though Cheney's not been in the public eye lately, he still generates news. Have a glance at excerpts from an AP wire story today on yet another broken promise to taxpayers from GOP leaders, related to Cheney and his political travels:

Officials with the city, as well as Kootenai County, say they will not ask the Republican Party of Idaho to reimburse them for expenses generated by the event, which was not open to the public. [...]

"Not to simplify it, but we weren't doing it for the Republicans," Watson told The Spokesman-Review. "We were doing it because we were asked by the Secret Service."

State GOP Executive Director Jayson Ronk said the vice president's visit wouldn't cost Idaho taxpayers a penny. Now Ronk is declining to comment and instead referred questions about the costs to the White House. "That's just our policy," he said. [...]

"I would think that the Republican Party can come up with $3,500 dollars to pay for a campaign visit by the vice president," Democratic Party spokesman Chuck Oxley told The Associated Press on Wednesday. "If they don't, it just shows the extent of their arrogance, which we've come to expect." [...]

According to public records obtained by the newspaper, sheriff's department employees worked about 60 hours of overtime for the visit, at a cost of $2,014. That doesn't include the regular pay of 26 employees who spent time at the airport where Cheney spoke.

The Coeur d'Alene Police Department reported it spent $1,506 on the visit and would not seek reimbursement. "For $1,500 to have a vice president in this city, I don't think they would find that a huge expense," police spokeswoman Sgt. Christie Wood said.

Posted by Unknown at 9:52 AM
Email ThisBlogThis!Share to TwitterShare to FacebookShare to Pinterest