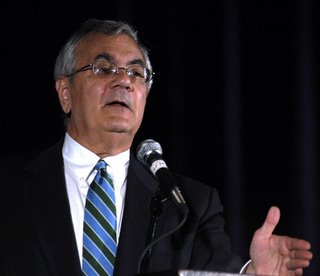 Gay Democratic Representative Barney Frank is the PoliticalMoneyLine's number two in rankings of top Congressional travelers' whose tabs were picked up, in whole or part, by private non-government groups. With 71 trips under his belt, I guess congratulations are due to the gentleman from Newton who's been on the road quite a bit since 2000, according to Barney's travel records, as analyzed and made available by the PoliticalMoneyLine site.

Looking over Barney's itineraries, it's clear when he travels, it's for causes of importance to him. He's spoken to statewide gay groups fighting restrictive ballot initiatives, a Jewish AIDS nonprofit, unions, advocates for immigrants rights, and he attended the late lesbian leader and therapist Betty Berzon's memorial service. Barney's travels primarily are for liberal social issues and on behalf of organizations working for tolerance and social diversity.

How does Barney's traveling stack up against his GOP counterpart, Jim Kolbe? Just between us gay guys, Barney puts Kolbe to shame, by my liberal political standards, in terms of giving back and being there for your community and diverse constituencies, judging by their respective travel files. I can't find anything gay-specific in Kolbe's file, and I'd be hard pressed to say he's spent much time on the road talking to grassroots groups or advocacy organizations working for tolerance.

Okay, it's probably unfair to compare a liberal gay Democrat's travel records with those of a moderate gay Republican, because, after all, one would expect their travels to reflect their political leanings. But it's still interesting to examine such files, if only from a transparency in government perspective, right?. 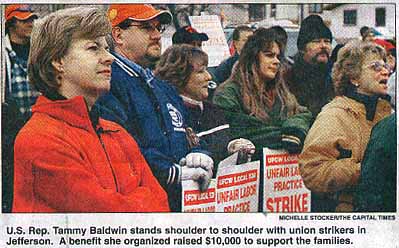 Falling somewhere between the two gay congressman is Democratic Rep. Tammy Baldwin, and her travel documents show she's spoken before a few gay groups, like Barney Frank, and attended a forum sponsored by the Aspen Institute, just like Jim Kolbe has. Plus, Baldwin lists her partner, Laura Azar, as her spouse on her disclosure forms.

Kolbe made one trip connected to AIDS when he went to Geneva to interview for a job with the Global Fund for AIDS. Click here for Kolbe's travel info.

And as he ends his congressional tenure, Kolbe faces scrutiny from the mainstream media over his travels. The Associated Press ran this story on the wires Wednesday, when many gays were traveling or shopping. It needs some extra attention:

WASHINGTON -- Arizona Rep. Jim Kolbe may be retiring at the end of the year, but that hasn't kept him from racking up free trips abroad.

Kolbe, a Tucson Republican who announced his retirement plans a year ago, reported visiting Turkey, Italy, Poland, England, Canada, Spain and Belgium since June _ all on the dime of private groups including the Aspen Institute and the German Marshall Fund.

Kolbe took more privately paid trips in 2006 than anyone else in Arizona's congressional delegation, according to a list compiled by the independent Web site PoliticalMoneyLine.com, which tracks political spending.

The value of the trips totaled almost $40,000. Most were for three to five days to participate in international summits such as the Bellagio Conference on Migration in Bellagio, Italy, in July.

One, to Geneva, was to a job interview with the Global Fund to Fight AIDS, Tuberculosis and Malaria. [...]

But Kolbe took the trips after his committee approved the foreign operations bill on May 25, which is one of his key responsibilities. His first privately paid trip of the year was to Istanbul, Turkey, between May 29 and June 4. [...]

Kolbe's travel stands out in a year in which many lawmakers cut back on their privately funded trips in the wake of scandals involving congressional travel. [...]

But Kolbe took far more trips than others in the Arizona delegation. The 22-year veteran of the House ranks 39th in number of trips on PoliticalMoneyLine's list of lawmakers' privately funded travel, which covers 2000 to the present. In another ranking, only two other members of Congress took more government-paid trips between 1994 and 2006, according to the group. [...]

Other than merely getting mentioned in the press as a gay GOP representative, I don't think Kolbe did anything of much substance for us gays while he served in the House. Maybe we should just wish him luck in finding a new cushy position and be glad he's gone from the House. Even though I've certainly had my differences and spats with the gentleman from Massachusetts, I'll take a Barney Frank over a Jim Kolbe any day of the week. 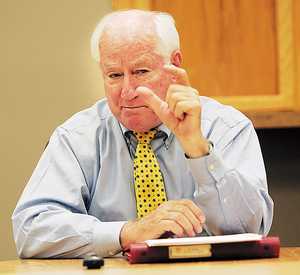 (Kolbe measuring his accomplishments on behalf of gay and lesbian people while in the House?)
Posted by Unknown at 7:13 PM
Email ThisBlogThis!Share to TwitterShare to FacebookShare to Pinterest

In 1998, Jim Kolbe (R-AZ) led a successful effort in the House of Representatives to retain Clinton's Executive Order 13087, which added sexual orientation to the Federal Government's own EEO categories. The fact that Kolbe was a member of the majority party was crucial to the success of this effort. Thank you.