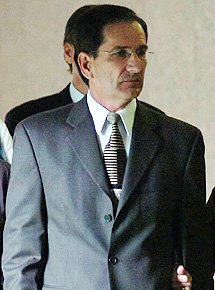 Remember that corrupt Bush crony, Rene Botet of Puerto Rico, that I told you about last week?

His trials and troubles have really flown under the US mainstream media radar, even though he's got extensive links to Bush and the GOP, and except for recent coverage from In These Times, Botet, his buddy Bush and his case are escaping public scrutiny.

Who knew another in a long line of Bush cronies was convicted last week? I found a release on the US Justice Department web site, announcing his conviction on Friday, November 3.

Vazquez-Botet, 51, held a variety of positions with the political party which controlled the executive branch in Puerto Rico during the relevant period. He is also a pediatric ophthalmologist. Under the extortion scheme, between 1996 and 1999 he is alleged to have received cash payments totaling over $300,000 and to have directed that payments be made to third-parties totaling approximately $80,000. The indictment also charges that Vazquez-Botet fraudulently concealed the extortionate payments and other income on his income tax returns for the Commonwealth of Puerto Rico.

Can't say that I would expect the DOJ under Bush to go out of its way in such a release to remind the public about Botet's links to the president, but on the other hand, I do consider it the responsibility of the press to include those cronyism links in stories.

No surprise here, right? The AP wire story on the convictions fails to say a thing about the Botet and Bush connection, showing another recent shameful example of a lapdog media not doing a good job.

SAN JUAN, Puerto Rico: Two former allies of scandal-plagued ex-Gov. Pedro Rossello were convicted on Friday of extorting millions of dollars in kickbacks from a public works project in the late 1990s.

Rene Vazquez Botet and Marcos Morell Corrada, both former officials of the Rossello's New Progressive Party, were accused of demanding US$2.4 million from companies that was granted contracts for an aqueduct serving the Puerto Rican capital of San Juan.

A federal jury in the U.S. Caribbean territory deliberated for 14 hours before delivering guilty verdicts on charges including conspiracy, extortion and money laundering.

Vazquez, who was Rossello's campaign manager, and Morell, the party's former secretary-general, joined several other former Rossello-era officials who have been convicted of graft. [...]

Is it election day yet? I want the GOP nightmare to be over.
Posted by Unknown at 10:43 PM
Email ThisBlogThis!Share to TwitterShare to FacebookShare to Pinterest