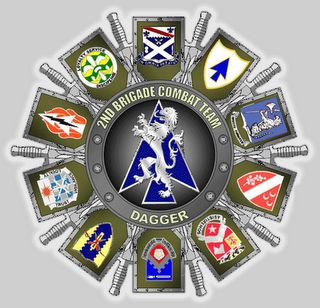 Let me make absolutely sure I've got this right.

The world's reigning superpower took five long, deadly months, to send an elite troop from Germany to fight in Iraq? Even though there were no tangible signs of decreased activities by the insurgents and barrels of blood -- American, Iraqi, UK, et al -- was flowing in the streets, "military leaders" thought it best to delay the Dagger Brigage's entry into Iraq.

The Stars & Stripes article does not say if those leaders are based on the ground or at the Pentagon, but regardless of their location, it seems like they seriously misread the conditions in May in the war-ravaged country. Good thing we don't have politicians in Washington dictating combat policy in Iraq, when "military leaders" are doing such a fine job, right?

Frankly, I'm starting to wonder if we did turn over military decisions to the politicians in Washington, how much worse could they do than Rummy?

Let's go to the story:

It may have been months later than planned, but the 1st Infantry Division’s 2nd Brigade Combat Team has finally made it to Baghdad.

The unit, known as the Dagger Brigade, is taking over U.S. operations in Baghdad from its fellow Germany-based 2nd Brigade Combat Team of the 1st Armored Division.

The move was five months in the making. In May, the 1st ID soldiers were told their deployment to Iraq was being delayed indefinitely because military leaders had concluded that the conditions on the ground had improved.

WTF? I sure would like to know what exactly had improved, considering Americans and Iraqis were still dying and by the end of May, Americans deaths had surged, according to the Iraq Coalition Casualty Count:

More from the Stars & Stripes:

The 2nd BCT finally got the call to head downrange in August, about the same time 2,000 1st AD soldiers were sent to the Iraqi capital to take part in the second phase of an operation to secure Baghdad from violence. [...]

Making the move into Iraq during the second and third weeks in October, the Dagger Brigade was “piecemealed out where it was needed, a company going here, a company going there,” said Maj. Wayne Marotto, public affairs officer, 1st Armored Division.

One of those units, the 1st Battalion, 26th Infantry Regiment, has already been hit hard by the move into Iraq. The 1-26 moved into Baghdad before the majority of the brigade, and has lost six soldiers since the beginning of September. The unit has a memorial scheduled Thursday in Schweinfurt for Sgt. Willsun M. Mock, who was killed by a roadside bomb on Oct. 22. [...]

Excuse me while I weep, and prepare to vote next week.
Posted by Unknown at 10:24 AM
Email ThisBlogThis!Share to TwitterShare to FacebookShare to Pinterest

"Excuse me while I weep, and prepare to vote next week."

I just so happened to be a spouse of 1-26th Infantry BN and think it's a shame how ignorant this article is posted - like it meant NOTHING that we've lost so many brave guys already! It's not our choice to make these decisions, it's not their fault - and EVERY loss is worth our weeping!

I still remember the wife who broke down crying at the memorial like it was yesterday and I wish you were there to see it.

Shame on you - shame on our Politicians!

well excuse you. somebody like you (i guess you never been in the military) should be ashamed... i am a spouse from schweinfurt my husband is deployed in operation iraqi freedom. i have been to all the memorials that took place here in schweinfurtand ans then for somebody to say excuse me that i weep is really pissing me of. do you even have any idea what we as family members have to go through on a daily basis? i really wish for you to attend one of the memorials, only one and maybe then you understand and then maybe you think about before you leave a F***** up comment like this.

I just read your article and i wonder if you even have a clue what youre talking about. You are supposed to be a man that was in so many shows and newspapers. Well next time you should make a better research, before you write anything like that. Believe me the military is doing a "fine job", cause none of your so called politicians is there to fight for their country, it's the military. It's embarrassing for everyone, that you think about it that way. You let the soldiers, that made the ultimate sacrifice, down and with them also their families and friends. It's a shame how you think of the people, that make it possible for you to live the way you do. If you are so tough, then join the military and go downrange yourself and then you can talk about the situation, after you lost buddies and friends and family members.

Our beloved Will, we are so proud of you. You were the best of men, never surrendered, never gave up. You will not be forgotten. Rest brave solider, your work is done...Strength and Honor!
God be with you till we meet again,
Love, big sis Tammy