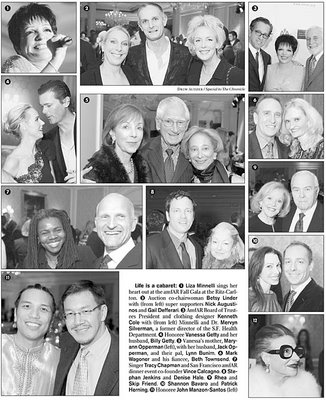 Almost as if to counter the CDC's well-funded social marketing campaigns of recent years lecturing gays that HIV is no picnic and not fabulous, the Sunday "Style" section of the San Francisco Chronicle today features a simply marvelous report on Liza Minnelli's glamorous appearance at a recent AmFAR fundraiser, darlings. 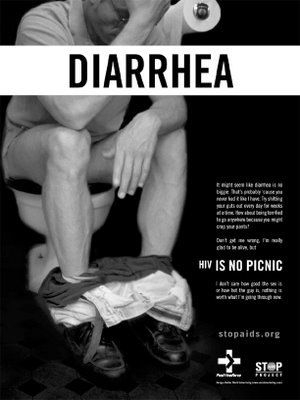 The Chron's gushing story was standard fare in terms of covering yet another "celebs and moneyed people use HIV to get their names and photos in the paper, while the needs of actual people with AIDS go unmet" event. Not one PWA is in the piece and the incredible good news about San Francisco's HIV infection rate, on the decline for many years according to epi data from the DPH, is ignored. 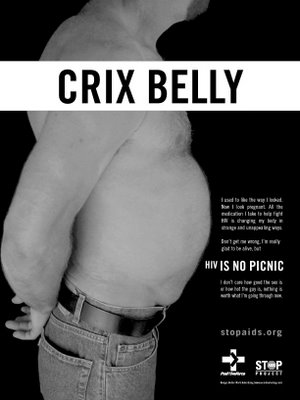 Instead, a close to washed-up gay icon, who knows all about being the beard for closeted white men on the down low, tries to scare the glitzy gathering with frightening numbers:

"I worry people aren't maintaining vigilance in preventing this disease," Minnelli said, dashing off the latest stats for women and children in the poorest countries, who are contracting AIDS at an alarming rate.

In no way do I wish to minimize the very real problem faced by at-risk women and girls in developing nations, but would it be so un-fab of Liza and AmFAR to cite the stunning drop in new HIV infections in this hard-hit city?

And I'm also not suggesting we don't need beautiful people with money pitching in to fight and cure AIDS, but speaking for myself and my circle of friends, we're more than saturated, and fed up, with patronizing and exploitive social marketing campaigns constantly telling us there's something we doing wrong over HIV, while AIDS organizations trot out celebs in designer clothes to raise money for people with HIV, many of whom struggle to live on limited budgets in SRO hotels mere blocks from the AmFAR shindig.

One day, I'd like to see the images from the AmFAR party mingled with the CDC-funded ads exploiting PWAs, just for the sake of balance and to give the public a more-rounded picture of all aspects related to AIDS. I guess that day is today.

From the Chron today:

Life is a cabaret: At the amfAR Fall Dinner, Denise Hale finally got the chance to introduce her "two children." [...]

The Ritz-Carlton was rockin' as a record crowd gathered for a gala and auction, raising $430K. [...]

As dazzling and passionate about AIDS activism? Liza with a "z," who gamely sang for her supper (created by Delfina chef-owner Craig Stoll).

Shimmering in a sparkling pink minidress, gesturing in that familiar way, Minnelli kicked off her set with "Cabaret."

She also, devilishly, kicked off her shoes and made a sly joke: "These shoes are killing me. This and another ex-husband!"

The crowd roared with laughter, appreciating the songbird as fighter who has well learned to channel adversity into positive action. [...]

"I worry people aren't maintaining vigilance in preventing this disease," Minnelli said, dashing off the latest stats for women and children in the poorest countries, who are contracting AIDS at an alarming rate.

"This disease isn't over yet," Minnelli said, her deep brown eyes big as saucers as she jutted out her slightly quivering chin in defiance. "This battle is not won. So we keep on fighting."

(Photo credits: Top image by Drew Altizer; special to the Chron. All other images from CDC-funded ads.)
Posted by Unknown at 11:15 AM
Email ThisBlogThis!Share to TwitterShare to FacebookShare to Pinterest