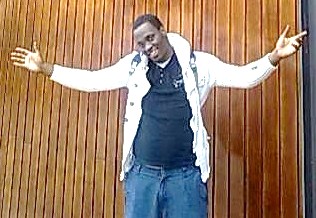 This just hit my in-tray. It's from Roberto Malini of the EveryOne Group, which has gay leadership and focuses on political refugees and asylum seekers of all sexual orientations and gender identities. Feels good to have a victory to celebrate on the global level! All the best to Eddy Cosmas, pictured, and congratulations to everyone who worked on his behalf.


An extraordinary result that the Movement for Justice and EveryOne Group share with a network of activists and NGOs that have worked in perfect synergy to ensure a bright future for this young man.

London / Rome, March 6th, 2012. Eddy Cosmas, the young homosexual man from Tanzania who last year was just a step away from deportation, has seen his dream of avoiding a terrible fate in the country he had fled from finally come true.

Anna, from the Movement for Justice, wrote to us from London immediately after hearing about this great humanitarian and civil achievement: "Dear friends of EveryOne Group, we won. Within three weeks, Eddy will get political asylum. I want to let you know immediately, even before our press release. In the case of Eddy Cosmas, our common action, which has raised much international publicity, has reversed the situation and led to a victory over the system."

Posted by Unknown at 12:03 AM
Email ThisBlogThis!Share to TwitterShare to FacebookShare to Pinterest