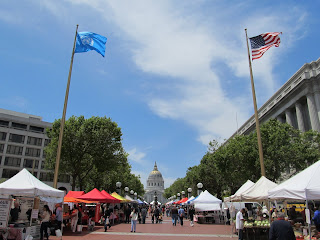 (In the city where the UN was chartered, the international body's flag flies at a municipal plaza.)
Yes, I have a thing about public flagpoles on city property and creating equal access for all San Francisco citizens to use those structures as tools for social change.

Almost two weeks ago, after hearing gay Supervisor David Campos and bisexual Supervisor Christina Olague tell the Harvey Milk Democratic Club that they had an interest in policies related to all flagpoles on city property, I sent the request below. My hope was that they would use the request to shine a light on those policies and create change in the process.

Unfortunately, Campos and Olague and their four paid aides have not responded to the request to sign their names to the global LGBTI letter promoting the UN debate tomorrow on violence against our community, and I've not heard from them about lowering the United Nations flag in the center of our UN Plaza.

Numerous emails and phone calls to Campos and Olague's offices have not produced a single reply, and the progressive Supervisor Jane Kim, who is my supervisor and whose district contains UN Plaza, shined me on to the Department of Public Works, which has ignored my direct requests, at Kim's direction, to use the United Nations flag to send a message before the UN debate.

On the eve of the historic UN debate, this disturbing report is circulating on the web, reminding us of the death and horror LGBTI people face daily around our planet:

The International Gay and Lesbian Human Rights Commission has today received reports from Iraq of a wave of targeted killings of individuals who are perceived to be gay or lesbian. According to Iraqi human rights activists, in early February 2012, an unidentified group posted death threats against "the adulterous individuals" in the predominantly Shiite neighborhoods of Baghdad and Basra. The threats gave the individuals, whose names and ages were listed, four days to stop their behavior or else face the wrath of God, and were to be carried out by the Mujahedin. According to sources inside Iraq, as the result of this new surge of anti-gay violence close to 40 people have been kidnapped, brutally tortured and murdered. The Iraqi authorities have neither responded to this targeted violence nor have they publicly denounced it. It is widely believed that these atrocities are being committed by a group of the Shiite militia.

May the queer Supervisors read about the latest atrocities perpetrated against their brothers and sisters, and use this opportunity to remember the dead and send a message to the world that San Francisco is fully engaged about the global anti-LGBTI violence.

Here's my request from two weeks ago to Campos and Olague:


On behalf of the Gays Without Borders group, I wish to make a request to lower the enormous United Nations flag that flies on one of the poles at United Nations Plaza, which is city property maintained by the Department of Public Works. Some background why this request is being submitted.

In two weeks, on Wednesday, March 7, the UN Human Rights Council in Geneva, Switzerland, will hold its first-ever debate on the bloody and deadly violence perpetrated against LGBT people around the world because of their sexual orientation. See the attached sign-on letter that I am circulating among global activists, for additional details on the debate and I also ask that you consider adding your name to the letter.

I want to lower the UN flag here, the city where the UN was chartered, on Sunday, March 4, or on Monday, March 5, and feed two birds with one seed. Let's lower the flag to remember and honor all LGBT bashed or killed worldwide, while also reminding the UN and the world that our lives and issues will not be ignored.

Staging a short ceremony, with a few speeches, at the base of the UN Plaza flagpole a few days before the debate in Geneva would allow Gays Without Borders and our allies to use photos, videos and written reports of the ceremony to send an important message to the UN before they begin their debate. That coverage and attention takes time to generate across borders, time zone and assorted languages.

A key message at the ceremony would be promoting the the live-streaming of the March 7 debate through the UN media department's facilities. We must drive eyeballs to the streaming from Geneva, and tell the world "Gays are watching the UN".

Please let me know if you can inquire with the DPW about rules for the public to use the public flagpole at UN Plaza, and find out who has the key to the control box for the flagpole.

I hope this project is of strong interest to you and that the global LGBT activist movement can count on your support to promote the March 7 debate and bring pre-debate visibility to the violence gays suffer daily around the world.

A prompt reply is requested and would be very appreciated, as time is running out to properly engage the SF and global gay community before the UN debate. Thanks.

Posted by Unknown at 2:25 PM
Email ThisBlogThis!Share to TwitterShare to FacebookShare to Pinterest