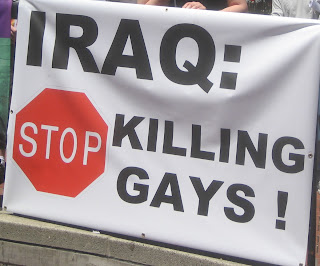 [UPDATE: Rain or shine, the vigil goes on as scheduled!]

Now, with reports emerging from Iraq of more than 100 deaths of gays, emos and goth persons many killed after their heads were bludgeoned with cement blocks in the past four weeks, and threats of additional atrocities, Gays Without Borders is taking to the streets of the Castro to send a message to Iraq's government, clerics, militias and citizens: Stop killing gays, emos and goths.

If you're not familiar with the details of these murders, click here to read numerous mainstream and gay press accounts of the forces behind the murders of young individuals who dress and act differently than normal conservative Iraqi society. Be sure to also check out the Rainbow Iraq blog operated by a gay Iraqi in exile using the pseudonym Bissam.

Here are the details:

The demonstration has a main goal: Create photos and videos illustrating lesbian, gay, bisexual and transgender support for the besieged and fearful targeted communities in Iraq. Then use those images to show the world and our friends in Iraq that LGBT activists are not silent over the murders.

At Castro and 18th Streets, the crossroads of gay America, we will display our "IRAQ: STOP KILLING GAYS!" banner, and tape enlarged photos of the victims when they were still alive, after being murdered, along with news stories to the walls of the Bank of America. Candles will be lighted in remembrance of the dead and hope for an end to the killings.

No speeches are planned, but we will have a bull horn for anyone who wishes to speak out. For two hours on Wednesday, we are asking those walking past our vigil to take a few minutes and bear witness to the unconscionable deaths taking place in Iraq.

Our action is one part of the global response to the Iraqi situation - from pressuring governments and the United Nations to take action protecting the at-risk communities to using social networking to sustain visibility. We hope other street actions take place in coming days.

Below are some of the images of the victims found on the web, and that will be on our posters. They're graphic and may not be suitable for all readers. I do not know if the dead bodies are of the living young men in each image. Notice that the corpse in the last two composites appears to be the same but the accompanying photos show two different living males.

Posted by Unknown at 9:20 PM
Email ThisBlogThis!Share to TwitterShare to FacebookShare to Pinterest

Its really horrible!! I am scarred from Iraq people now. I hate that people who not giving rights to person to live with their own style.