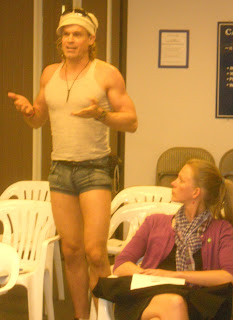 Allow me to introduce the super sensual sexscort, and so much more, Starchild. He was at the board meeting of the Castro Benefit District tonight and turns out he endorses my campaign to reclaim flagpoles on public property.

For every agenda item that allowed for public comment, he had something to say. After backing my arguments about expanded Sunshine at the CBD, Starchild spoke about his own Castro concerns.

He was a breath of fresh air and quite a dish in his skimpy outfit. 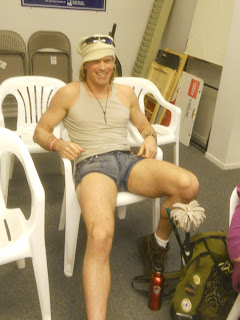 The owner of the newly-opened Dancing Pig, Larry Metzger, made a presentation about the parklet soon to be installed in front of his joint, and brought along free samples of his wares to share.

He's a great guy and I'm sorry I didn't get photo of him tonight. Looking forward to eating at his place real soon.

Check out the menu here. Any establishment in the Castro with the word pig in it is guaranteed to succeed. 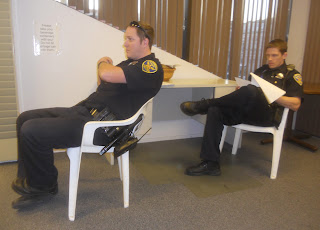 The meeting was facilitated by Gustavo Serina in an officious manner, with lots of shade thrown my way. He's not the least bit pleased dealing with my public records requests and read a written statement explaining a few ways the CBD is changing records management. I quickly verbally requested a copy of that statement per Sunshine provisions.

As at the executive committee on Tuesday, Serina again did the community a disservice withholding details about the violent episode at another committee meeting last week.

Keeping the facts hidden about who, what, why, where, etc, were at play last week is unnecessary, but that's a standard problem with control queens. If you've got two San Francisco police officers sitting through most of the meeting because of the violence at the committee, then full details should be disclosed. 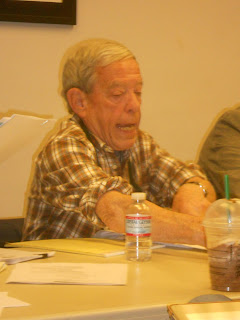 Today I sent a complaint to Serina about how, based solely on minutes prepared by Richard Magary, it appears as though the CBD violates Robert's Rules of Order Number 59 requiring minute-taking by the secretary because Magary is always listed in the minutes as a member of the public. I further complained that all minutes prepared by Magary, and shamefully approved by the board, omit the name of every speaker during public comment.

Well, Serina disclosed that Magary is an independent contractor paid to take the minutes at board meetings. Until tonight the CBD had never shared this info and it raises troubling questions about why they kept it secret, why the secretary is not taking minutes and what else they are not telling the public about how the CBD operates.

During general public comment I used my two minutes to excoriate Magary, by name, for his massive shameful failure to include the names of every community member who's spoken before the CBD in the past three years. "This is not the Mattachine Society, is it?" I asked.

Magery has rendered invisible every public speaker and the contents of their comments, and he has done this on the public dime. The historical record as prepared by Magary are far from an accurate picture of what really happened at CBD meetings for three years. Why worry about the homophobes keeping us out of historical documents when Magary and the CBD do it so well with taxpayer money?

This is a major sustained disrespect to the entire community and CBD would be wise to amend the minutes include the names of speaker and their comments, using all of Magary notes and the sign-in sheets he passed around every meeting.

Furious, Magary interrupted me to say I was mispronouncing his name and I told him to cease, then claimed an extra ten seconds of time to make up for his rude outburst. 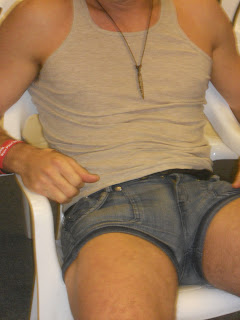 Many thanks to Starchild for his big presence tonight and all of what he had to say and display. He's a good man, and reminded me that while I may not enjoy widespread backing within the community, there are special queers like him who understand my advocacy and the need to reclaim our lost public spaces in San Francisco.

Starchild, please come around to next month's CBD meeting and speak up again. And wear as little clothing as possible!
Posted by Unknown at 10:50 PM
Email ThisBlogThis!Share to TwitterShare to FacebookShare to Pinterest