(Jane Warner Plaza at dusk.)
Thanks to several public records requests I've made to the Castro Benefit District, a well-funded civic group covered by Sunshine statutes, I've learned that only eight emails to the CBD directed to Supervisor Scott Wiener last spring played a key role in two anti-homeless debates in the Castro recently. Three of the eight messages were from the same person, one Nelson Murcar.

The first debate was at the CBD in May when eight emails addressed to Wiener were copied to the CBD, complaining about homeless folks using the benches at Harvey Milk Plaza all hours of the day and night, and for some unsavory behavior. Large benches were installed by the CBD and the May debate considered removing them, but they were retained and instead both police and private security surveillance of the plaza were enhanced to crackdown on abusive persons.

A second debate flared earlier this year, as Wiener's legislation to enact additional nuisance restrictions on Harvey Milk and Jane Warner Plazas at the intersection of Castro and Market Street churned through the legislative process. Homeless persons and their advocates knocked back provisions targeting this population.

Reading internal CBD emails and minutes from their public meetings, it's evident a few Castro residents pushed for and got the debates, captured Wiener's attention and gave him cover to introduce another nanny-ish law, that passed the full Board of Supervisors and doesn't seem to have made any noticeable difference at either plaza.

I've posted the full batch of emails here, which were documents shared with the CBD's paid secretary Richard Magary from May 2011. Here are two of the Nelson Murcar emails that got the plaza debates rolling: 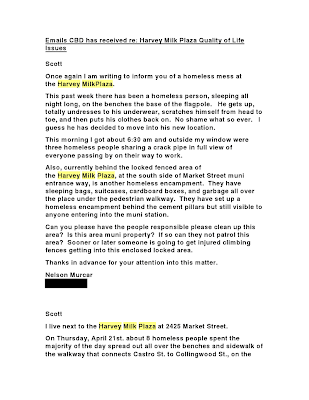 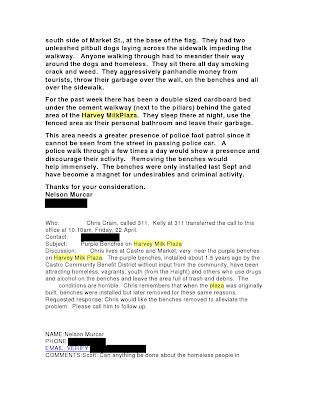 Posted by Unknown at 11:34 PM
Email ThisBlogThis!Share to TwitterShare to FacebookShare to Pinterest