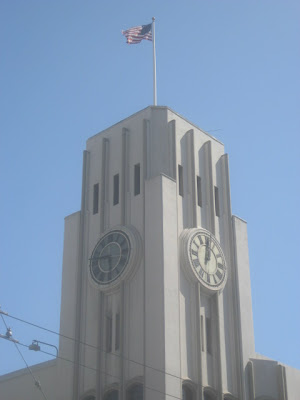 As with so many daily newspapers these days, the SF Chronicle has suffered big losses in profits, but can't the parent Hearst Corporation afford a mechanic to fix both faces of the iconic tower's clock?

I was riding my bike down past Mission and Fifth Streets, and raised my head to see what the time was. At that moment, around 3:30 pm, the eastern face of the Chronicle's clock read 5:45-ish, while the northern face read noon/midnight. I had to snap a photo, for posterity's sake.

Guess one could say the broken Chronicle clock is right four times a day. Let's see how long it takes for the paper to get the timepiece to run properly. It's one of the little things that make the South of Market neighborhood so special.

It is in the process of being fixed now FYI.

Posted by Unknown at 6:40 PM
Email ThisBlogThis!Share to TwitterShare to FacebookShare to Pinterest